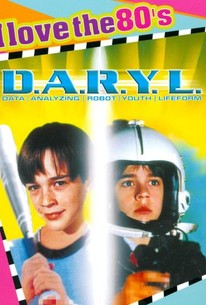 A ten-year-old boy (Barret Oliver) found at the edge of a road is picked up and later adopted by a young childless couple (Mary Beth Hurt, Michael McKean). They begin to raise him, but find that he has several odd habits. When another couple claiming to be his parents come to pick him up, they begin to suspect there's more to the boy than meets the eye.

Pat Fuleihan
as Woman at Window

Matt Butler
as Trooper
View All

There's an intrinsic emotional pull to this earnest tale of parents in search of a child.

To be sure, we`re not talking about a bad movie, just one that could have been so much better.

Second half of the picture is the most far-fetched and also the most fun ...

A filming-by-numbers mix of small-town nostalgia, soapy family drama and high-tech sfx, this Dreary Android Runaway Yarn Lags way behind the Spielberg thoroughbreds it tries so hard to ape.

If there is a subtext to ''D.A.R.Y.L.,'' and I'm not entirely sure there is, it's that one should always be kind to a computer, because a computer might be somebody's brother.

What is most astonishing about the child robot D.A.R.Y.L. is not that he can singlehandedly fly a U.S. Army supersonic jet but that he is able to choose between chocolate and vanilla ice cream.

Although highly derivative of ET, WarGames and others, this science-fiction drama is still a charming, lightweight diversion.

For moviegoers with sky-high imaginations and mushy hearts, D.A.R.Y.L. satisfies like a summertime chocolate-chip ice-cream cone.

Younger children should find D.A.R.Y.L. fairly entertaining, but this is barely tolerable for anyone else.

The main problem with this thing (besides the direction and the writing and, oh what the heck, the special effects, the acting, and the score). . .

Astounding to see there is an 80's movie left that I haven't seen! I have to say that I enjoyed this vastly more than my recent revisiting of The Goonies! Barett Oliver was such a cute child actor. It really is a shame he had a reasonably short movie career. Here he plays daryl, who is part robot, part human. Yes, it's a boys movie, but is a likable and enjoyable one. Though it looks dated and very typically 80's, for me that was part of it's charm.

Gosh, I saw this such a long time ago, I don't remember it, I should watch it again some day.

Daryl is a boy genius who lives with his foster parents. The government soon come after him.