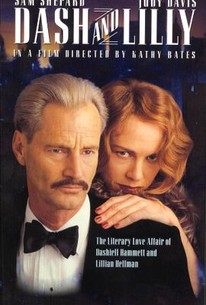 Oscar-winning actress Kathy Bates directed this made-for-cable feature inspired by the true story of one of America's greatest literary couples, Lillian Hellman and Dashiell Hammett. Hellman (Judy Davis) was an award-winning playwright whose successes included +The Children's Hour and +The Little Foxes, while Hammett (Sam Shepard) was a superlative mystery writer whose books inspired such classic films as The Thin Man and The Maltese Falcon. The couple met in the 1930s, while Hammett was working in Hollywood as a screenwriter. They remained together until Hammett's death from lung cancer in 1961 (never married despite the conventions of the day) in a relationship strained by Hammett's infidelity and their shared alcoholism. Dash and Lilly uses Hellman's 1950s testimony before the House Un-American Activities Committee as a springboard to look back at their relationship; both Hammett and Hellman were branded as Communists and called before HUAC, leading to a prison term for Hammett. The film also features Bebe Neuwirth as Dorothy Parker, Laurence Luckinbill as Joseph Rauh, and Mark Zimmerman as Walter Winchell. Hellman's relationship with Hammett formed one of the plot points of the 1977 biopic Julia, which starred Jane Fonda as Hellman and Jason Robards in an Oscar-winning performance as Hammett.

Victor A. Young
as Harvey Chernoff

Critic Reviews for Dash and Lilly

Dash and Lilly, intending itself as a difficult romance, neglects both as writers.

Kathy Bates directs this portrait of an unconventional but long-lasting love relationship.

There are no featured reviews for Dash and Lilly at this time.