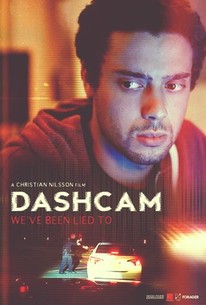 Inspired by Antonioni's Blow-Up, Brian De Palma's Blow Out, and Francis Ford Coppola's The Conversation, Dashcam is a stunning psychological thriller that follows Jake (Eric Tabach, "Blue Bloods")--a timid video editor at a local news channel who fantasizes about becoming a reporter. While editing a piece on a routine traffic stop that resulted in the death of a police officer and a major political official (Larry Fessenden, Dementer, Jakob's Wife), Jake is inadvertently sent dashcam video evidence that tells a completely different story. Working alone from his small apartment in NYC, Jake uses his skills as an editor to analyze the footage and piece together the truth behind what actually happened. Has Jake uncovered a conspiracy that he can break on the morning news? Or is he seeing things that aren't really there?

Jacob A. Ware
as Dispatch

Dashcam is an extraordinary low-budget political thriller that does a lot with a little, and is a masterclass that sometimes, having the guts to punch above its weight can pay off just through sheer audacity alone.

Dashcam is an enjoyable and thought-provoking thriller, and I'm looking forward to finding out what Nilsson has in store next.

Makes efficient use of minimal tools to tell its story, proving that an excess of imagination beats resources any day of the week.

First two thirds of the movie is a fun mystery that mixes different styles. Final act takes a hard turn that takes away from the atmosphere and tension.

Well devised and put together, Dashcam could be the reinvention of the political thriller as we know it.

A wonderfully economical film, shot mostly in one room yet quickly generating the sense that big things are at stake.

An idea that should have worked, and sadly it's not even good enough for proof of concept so that Nilsson could remake it with a bigger budget and more compelling actors.

Nilsson generates substantial suspense from the merging and amplifying of video and audio files.

There are no featured reviews for Dashcam at this time.