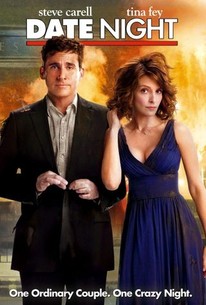 Critics Consensus: An uneasy blend of action and comedy, Date Night doesn't quite live up to the talents of its two leads, but Steve Carell and Tina Fey still manage to shine through most of the movie's flaws.

Critics Consensus: An uneasy blend of action and comedy, Date Night doesn't quite live up to the talents of its two leads, but Steve Carell and Tina Fey still manage to shine through most of the movie's flaws.

Critic Consensus: An uneasy blend of action and comedy, Date Night doesn't quite live up to the talents of its two leads, but Steve Carell and Tina Fey still manage to shine through most of the movie's flaws.

Steve Carell and Tina Fey star in director Shawn Levy's comedy about a couple whose routine date night becomes anything but when dinner and a movie just won't suffice anymore. Their union in imminent danger of becoming hopelessly monotonous, the desperate couple goes to unprecedented lengths in order to preserve the spark. Mark Wahlberg, James Franco, and Kristen Wiig co-star in the 20th Century Fox production.

The real stars of the film are [Steve] Carell and [Tina] Fey for bringing such goofy conviction to this goofball comedy, much better than the director's previous attempts at broad humour in the two Night at the Museum films.

Their marriage seems real but their predicament feels like no more than a scriptwriter's invention.

... Date Night is the fun, lighthearted comedy that the two TV heroes needed to reclaim their box office status.

Fey, in particular, seems uncomfortable with the shenanigans.

For a film that doesn't even scrape the 90-minute mark, Date Night takes an awfully long time to end.

There is a somewhat engaging devil-may-care attitude to it all that's hard to dislike, and at just under 90-minutes Levy never allows the proceedings to drag on to the point they'd become annoying or tiresome.

Steve Carell and Tina Fey's hysterics manage to triumph over the rather uninspired plot.

Boring but effective comedy that agonizes until the end to keep things together. [Full review in Spanish].

Date Night is a fun, romp in New York City that explores issues of everyday life while adding some romance and openness about marriage.

Whenever the dialogue takes over, and we watch Fey and Carell click as romantic duo, it's tempting to imagine these TV stars as a big screen couple with a future-they deserve a better movie than Date Night.

Carell and Fey use their comedic talents to keep the film on track.

It got me some laughs so it was worth it. Plus, they're quite charismatic.

It's what happens when Steve Carell and Tina Fey remake Revolutionary Road.

Reasonable crime caper comedy which survives simply due to it starring Steve Carell :) there isn't too much to offer here, the plot is pretty basic, the acting is standard and the small 'action' sequences are nothing special or exciting, much like 'Get Smart' its good because of the dialog, awkward facial expressions and situations 'Michael Scott' errr Steve Carell gets into hehe problem is you always expect John Krasinski or Rainn Wilson to pop up whenever you see Carell. Fun film if your bored, nothing to shout about.