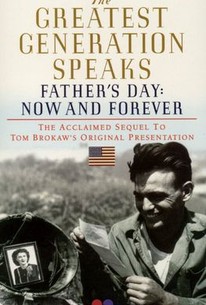 The once-irreverent NBC television news anchor Tom Brokaw created a sensation with his genuflecting best-seller The Greatest Generation, which celebrated the World War II heroics of various Americans. This documentary video is a companion piece to Brokaw's sequel, The Greatest Generation Speaks. This time around Brokaw shows, through interviews, commentary, and archival footage, how average Americans used what they learned as warriors to build post-WWII America's strong economy.

There are no critic reviews yet for Dateline NBC. Keep checking Rotten Tomatoes for updates!

There are no featured reviews for Dateline NBC at this time.