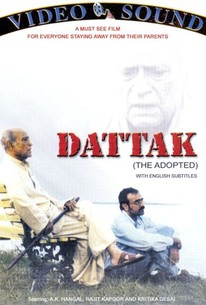 A son hoping to renew his relationship with his father discovers it may be too late in this drama. Sunil (Rajit Kapoor) was born in India, but after completing his education, he moved to the United States as part of his job with a large multinational corporation. Sunil made a token effort to keep in touch with his father while living in America, but when he stops getting answers to his periodic letters, he decides to pay his dad a visit, thinking he'll bring him back to America with him if the old man is having trouble taking care of himself. But when he arrives in Calcutta for the first time in a decade and a half, the city looks strange and unfamiliar to him, and he learns that his father moved away from his home a few years earlier. Sunil finds himself travelling from one city to another, following an increasingly fuzzy trail as he tries to find out what's become of his father, and realizing -- to his horror -- just how neglectful he's been.

There are no critic reviews yet for Dattak. Keep checking Rotten Tomatoes for updates!

There are no featured reviews for Dattak at this time.