Daughters of the Dust1991 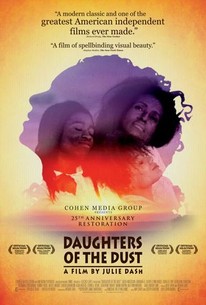 Critics Consensus: Daughters of the Dust addresses its weighty themes with lovely visuals and a light, poetic touch, offering an original, absorbing look at a largely unexplored corner of American culture.

Critics Consensus: Daughters of the Dust addresses its weighty themes with lovely visuals and a light, poetic touch, offering an original, absorbing look at a largely unexplored corner of American culture.

Critic Consensus: Daughters of the Dust addresses its weighty themes with lovely visuals and a light, poetic touch, offering an original, absorbing look at a largely unexplored corner of American culture.

Daughters of the Dust Photos

At the dawn of the 20th century, a multi-generational family in the Gullah community on the Sea Islands off of South Carolina - former West African slaves who adopted many of their ancestors' Yoruba traditions - struggle to maintain their cultural heritage and folklore while contemplating a migration to the mainland, even further from their roots. Cohen Media Group is proud to present the 25th anniversary restoration of director Julie Dash's landmark film "Daughters of the Dust." The first wide release by a black female filmmaker, "Daughters of the Dust" was met with wild critical acclaim and rapturous audience response when it initially opened in 1991. Casting a long legacy, "Daughters of the Dust" still resonates today, most recently as a major in influence on Beyonce's video album "Lemonade." Restored (in conjunction with UCLA) for the first time with proper color grading overseen by cinematographer AJ Jafa, audiences will finally see the film exactly as Julie Dash intended.

Catherine Tarver
as Woman with Baby

Marie Smalls
as Woman Being Baptizied

News & Interviews for Daughters of the Dust

View All Daughters of the Dust News

Critic Reviews for Daughters of the Dust

Let's thank Julie Dash for her persistence in bringing us this jewel. This is a story we will tell our children again and again -- and with each retelling, the colors will swell in our souls.

Writer-producer-director Julie Dash has taken extraordinary risks. The movie develops and grows and swells into something remarkable and alive, like an idea or a feeling or a child in the womb.

An Atlanta-based artist making her long-worked-for feature debut, Ms. Dash is a filmmaker of startling originality and delicacy. Her film is poetry in motion, part dream-memory, part tattered family album.

The film rewards the patient viewer who succumbs to its trancelike spell and understands that the movie is about the rhythms and rituals of a culture remembered.

[Dash's] refusal to spend much time establishing characters or expiating their conflicts makes this more like a stroll through a exhibition of sepia photographs than a full blooded drama.

It's a true original and, as such, of considerable value both as a film and as a sad yet hopeful summation of history as memory and experience.

...the film is created with many voices that weave and join with the other passages of history...

The visual beauty of Daughters is evident throughout, while the difficult narrative sneaks up on you.

Dash's film is as much a visual experience as an aural one. She is a film-maker whose passion for her subject permeates very frame.

Julie Dash's Daughters of the Dust offers so much to admire, it's too bad its occasional lack of clarity and meandering style weaken its impact.

If Daughters of the Dust is deceptively simple in its story and characterizations it is an overwhelmingly rich sensory experience.

Julie Dash is a talented film-maker; her movie (photographed by Arthur Jaffa) is full of haunted and haunting images. The narrative, how ever, is infuriatingly, wilfully obscure, the overall effect soporific rather than hypnotic.

Audience Reviews for Daughters of the Dust

Director Julie Dash's first feature. This was named one of the 50 greatest movies by black directors in The Black Film Canon by slate.com. This picture offers a chance to observe a unique culture and place and time that as far as I know has rarely been portrayed in cinema. Therefore it also offers a chance for the audience to build skills of empathy. I am not familiar with anyone in the cast, but the matriarchal Peazant family with many mother, daughter, sister, aunt, and niece relationships are well portrayed. In 1902 on the islands off the coast of South Carolina African folk-ways were maintained and this was known as Gullah culture. There are characters who are still connected to African pagan customs and magic, characters who have embraced Islam's influence, and characters who have received some education near white society on the mainland who have been converted to Christianity, and they all live together in relatively close quarters on this island. The narration is often poetically trying to describe memories. Visually it is full of earthy beach tones and many dreamy sequences.

A Top Ten Independent Film In My Book. Outstanding movie, a eye opener to some unkown history in the United States. Acting was incredable, Kino always has good productions. If you can find it buy it, Or Rent from Net Flix.

A very unique film and a valuable addition to the canon of great films on slavery.

Daughters of the Dust Quotes