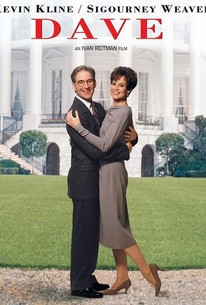 The ghost of Frank Capra must have smiled when he saw Dave, an amusing and effective update of one of Capra's favorite themes -- the scrupulously honest little guy who becomes a force for good against a corrupt system. Dave Kovic (Kevin Kline) runs an employment agency and seems to genuinely enjoy finding work for people who need it. He also bears a striking resemblance to the president of the United States, Bill Mitchell (also played by Kline) and occasionally gets work as a Bill Mitchell impersonator. One day, Dave gets a call from the Secret Service -- for security purposes, they want to hire him to act as a decoy for an upcoming appearance by the president. All goes well, but later that evening President Mitchell suffers a massive stroke while in bed with his mistress. Wanting to keep the matter a secret, two of the president's top advisors appeal to Dave to stand in as Bill Mitchell until he regains his health. One of the men behind this scheme, Bob Alexander (Frank Langella), hopes to use Mitchell's absence to promote his own right-wing political agenda, but after a few weeks "in office," Dave decides it's time to promote some changes of his own that will help increase employment and keep homeless shelters open. Dave also finds himself growing fond of Ellen Mitchell (Sigourney Weaver), the President's wife, while Ellen sees in Dave the idealism her husband left behind years ago. Dave features numerous cameo appearances by politicians, Washington insiders, and journalists; Oliver Stone also appears to explain a conspiracy theory regarding sudden changes in Bill Mitchell's behavior.

Ronald Brownstein
as Himself

Eleanor Clift
as Herself

Christopher Dodd
as Himself

Tom W. Harkin
as Himself

Bernard Kalb
as Himself

Michael Kinsley
as Himself

Morton Kondracke
as Himself

Frank Mankiewicz
as Himself

Christopher Matthews
as Himself

John McLaughlin
as Himself

Howard Metzenbaum
as Himself

Dawn Arnemann
as Mom at Durenberger's

Abner J. Mikva
as Himself

Robert D. Novak
as Himself

Thomas P. "Tip" O'Neill
as Himself

Richard Reeves
as Himself

Arnold Schwarzenegger
as Himself

Paul Simon
as Himself

Frank Birney
as Director of OMB

Alan Simpson
as Himself

Ben Stein
as Himself

Paul Collins
as Secretary of Treasury

Peter White
as Secretary of Commerce

Oliver Stone
as Himself

Kathleen Sullivan
as Herself

Jeff Tackett
as Himself

Helen Thomas
as Herself

Nina Totenberg
as Herself

Robert Walsh
as Speaker of the House

John Yang
as Himself

Catherine Reitman
as Herself

75 Best Summer Blockbusters of All Time

It's the spritely comic timing of the fine Hollywood ensemble that keeps Dave percolating. This affable, well-built comedy is Reitman's best since Ghostbusters.

It's impossible to say whether Dave will play as wonderfully over the decades as it does right now, but this smooth-as-silk comedy could not be more timely, or connect more hopefully with our current national consciousness.

While it's sloppy and draggy in parts, Kevin Kline, in the title role, delivers an ingratiating comedic performance.

Kline is so polished and resourceful that he can glide his way through even the creakiest bits and make them seem fresh.

"Dave" is the very model of a modern Capraesque comedy, being the story of a little guy who triumphs, through pluck and luck, over a corrupt system.

It's a high-concept premise that's employed to watchable yet erratic effect by Ivan Reitman...

Paying an homage to the prior work of the great Frank Capra, Dave offers a fresh contemporary take on a classic trope.

It's opportunistic, superficial, and great fun.

[A] delightful, gentle satire on the Washington political scene.

Dave isn't too careful about filling plot holes. It does a pretty fair job, however, of making jokes at the expense of the D.C. political scene.

There's something quite magical about 1993. Not only do I count it as one of the best years of my life, but it's one that also brought us some of the greatest movies I've ever seen. Personal favourites of mine like Jurassic Park and Groundhog Day. Among all those cinematic triumphs, there was also another, more anonymous story. One that sort of fell in the shadow of previously mentioned titans (and that I hadn't really heard of until recently). I'm referring, of course, to Dave. Now, I could speak volumes of what makes this into such a wonderful viewing experience. But as I'm trying to keep my reviews in digestable portions, let me just say the following: Kevin Kline at his career-best, Sigourney Weaver as a lovely first lady. Funny, romantic, touching and inspiring. And these are just a few of the things that I loved about it. An underrated, heartwarming and flawlessly directed comedy, that starts off great and then gets better for every minute thereafter.

Not terrific, but it's good to see Ivan Reitman still working.