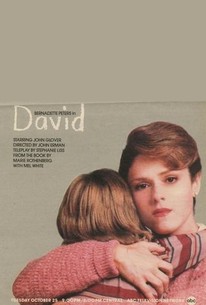 In this above-average made-for-television drama, Bernadette Peters stars as a mother facing the greatest challenge of her life. Based a true story, Matthew Lawrence stars as David Rothenberg, a six year-old who was viciously set on fire by his jealous father. Severely burned and disfigured, David courageously clung to life despite the odds against him. Determined to see her son through the ordeal, the film shows how his mother Marie (Peters) tirelessly worked to help nurse him back to life.

Patty Regan
as Woman at Hotel
View All

There are no critic reviews yet for David. Keep checking Rotten Tomatoes for updates!