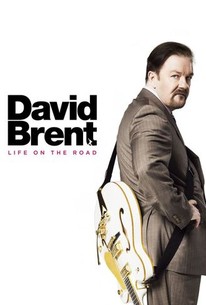 Critics Consensus: David Brent: Life on the Road has its moments, but this further exploration of an established character suffers in comparison to what came before.

Critics Consensus: David Brent: Life on the Road has its moments, but this further exploration of an established character suffers in comparison to what came before.

Critic Consensus: David Brent: Life on the Road has its moments, but this further exploration of an established character suffers in comparison to what came before.

Now working as a rep selling cleaning (and ladies personal hygiene) products up and down the country, David Brent hasn't given up his dream of becoming a rock star - or more specifically, singer/songwriter for fledgling rock band 'Foregone Conclusion'. As he assembles a group of mercenary session musicians, a talented sidekick for street cred and an overpriced yet underwhelmed tour manager, he embarks upon a self-financed UK tour coming to a venue near every major city near you.

News & Interviews for David Brent: Life on the Road

The Americans Season 4, Crazy Ex-Girlfriend Season 2, and More Available to Stream on Netflix and Amazon Prime
Ricky Gervais On The Office Movie And The New Breed Of Narcissism

View All David Brent: Life on the Road News

Critic Reviews for David Brent: Life on the Road

It's missing, entirely, the humanizing elements of the 'Office; series - presumably because Gervias, the sole writer/director/star (and sole performer to cross over from that series) has vastly overestimated the character's appeal.

Maudlin and unrealistic, it's also a lot less funny than what came before.

Gervais still wears Brent like a tailored suit, but 15 years of age has taken a lot of the bite out of both the performer and the character.

Doesn't have much to add beyond a few biographical details.

Ultimately, the scope of this modest exercise seems about right: A nice little movie, about a small man, with big dreams.

This is Gervais's film, unlike the ensemble effort of The Office. The result is more poignant than comic and I like it for that.

The cinematic return of the middle-management moron is the best thing Gervais has done in years.

Brent's genius was as a clown reflecting back the excruciating banality of work culture; here, it feels like Gervais is trying to bend the material too much to his own whims.

David Brent may be the character that made Ricky Gervais a comedic star, but David Brent: Life on the Road is just another example as to why that star has been rapidly fading.

Life on the Road, alas, is a slog too far down memory lane.

[Ricky] Gervais seems to have forgotten what made Brent such a strangely captivating figure on the original show.

Gervais slips effortlessly -- and convincingly -- back into the role that made him famous and delivers a film that is laugh-out-loud funny at times but also manages to be poignant and, eventually, even unexpectedly uplifting too.

Audience Reviews for David Brent: Life on the Road

Ricky Gervais is picking up right where he left the character with his show The Office. Now Brent wants to become a rock star. Of course that makes for plenty of wonderfully awkward situations but especially in the end really hits home when you see the sadness behind the clown. Gervais is a master in the finding the balance in this. And, more importantly, he is hilarious.

David Brent is back but perhaps, like the,band in the film, his worn out welcome is A Foregone Conclusion. Well acted but also cringe worthy at times too, although the songs are good.