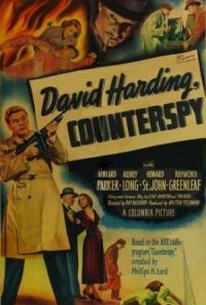 Based on the long-running radio program created by Philips H. Lord, the film opens with a radio commentator blasting the U. S. government for the manner in which a certain foreign power has obtained secret information during WWII. The commentator is brought to the secret headquarters of "David Harding, Counterspy" where he learns that the story was deliberately planted with the commentator to fool the enemy. Harding them tells, in flashback, a specific story to illustrate how counter-espionage works. Jerry Baldwin, a U.S. Navy officer is brought to a city where torpedoes are manufactured for the Navy, and his assignment is to find out information is leaking out to the enemy.

Allen Mathews
as Baker
View All

There are no critic reviews yet for David Harding, Counterspy. Keep checking Rotten Tomatoes for updates!

There are no featured reviews for David Harding, Counterspy at this time.