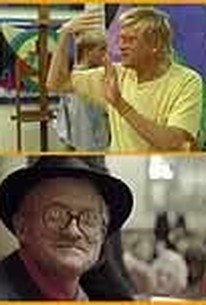 One of the best-respected artists of his generation, David Hockney is well known for his paintings, prints, and portraits, but he's also developed a reputation as a set designer for some of the world's leading opera companies. A passionate enthusiast of classical vocal music, Hockney's interest in opera has helped to transform the visual aspect of how the pieces are presented, from his bright use of color to his insistence on making lighting cues an integral part of his design. However, there's also an irony to Hockney's success in opera -- at the age of 67, Hockney began losing a significant amount of his hearing, which would not only impact his ability to create for a medium that has earned him so much acclaim, but rob him of his ability to appreciate the music that means so much to him. David Hockney: The Colors of Music is a documentary which examines the artist's unique approach to set design, how the music informs his life, and his feelings as he becomes aware each design project could well be his last.

Critic Reviews for David Hockney: The Color of Music

A ravishing feast for the eyes, with a steady stream of operatic excerpts to appease more impatient ears. Meanwhile, Mr. Hockney and his friends keep the proceedings on an exhilaratingly human level.

An elongated, rather aimless portrait that doesn't fully convey the essence of its titular subject.

In a documentary that celebrates flourish, the artist David Hockney lets a filmmaker record how he assembles elaborate opera sets.

Looking at the art and listening to the music is wonderful just on its own, but hanging out with Hockney is also a treat. He's a delightful companion.

This delightfully sensual documentary gets inside the artist's creative process while also treating viewers to glorious music by the likes of Wagner and Satie.

After seeing this film and the joyous miracles he has wrought on the operatic stage, he fully deserves to be called a master of the form.

Hockney is unquestionably a genial gent, but the film's rather shallow treatment of his art only reinforces the long-held opinion that Hockney is more a brilliant visual stylist than an artist of any great depth.

There are no featured reviews for David Hockney: The Color of Music at this time.