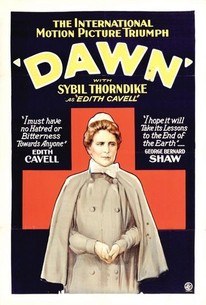 One of the most controversial British films of the 1920s, Dawn is the story of World War 1 nurse and martyr Edith Cavell. Making a rare film appearance, Dame Sybil Thorndike stars as Cavell, who risked her life by rescuing British POWs from the Germans. Captured by the Kaiser's minions, Cavell was sentenced to be executed, an action that sparked an international outpouring of outrage, even from neutral nations. At the time Dawn was filmed, the world was at peace and the Germans were striving mightily to suppress their previous reputation as warmongers. Thanks to legal and political intervention, the film was heavily censored, then removed from distribution altogether (the official reason for the suppression was the film's startlingly brutal depiction of warfare). In 1939, with the threat of war once more looming over Britain, producer/director remade Dawn as Nurse Edith Cavell, with Anna Neagle in the starring role and with all the original film's anti-German sentiments intact. Both Dawn and its remake were based on a play by Reginald Berkeley. ~ Hal Erickson, Rovi

Edward O'Neill
as A Priest

Griffith Humphreys
as The President

Maurice Braddell
as A Flier

Miss Sybil Thorndike's performance is perfect, and the acting of the minor characters is on the same high level.

There are no featured reviews for Dawn at this time.