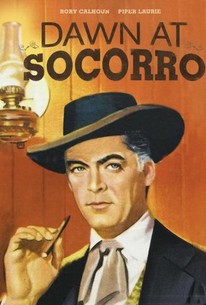 Rory Calhoun stars as veteran gunfighter Brett Wade in Dawn at Socorro. In a lengthy flashback, the audience learns why Wade has hung up his guns and turned to gambling. Upon meeting dance-hall girl Rannah Hayes (Piper Laurie), he vows to take her out of the shady saloon run by Dick Braden (David Brian). He engages Braden in a card game, winner take all, with Rannah as the stakes--only to lose everything. Sorely tempted to strap on his guns again to claim Rannah, Wade is saved from this fateful decision by the timely arrival of another notorious fast gun, Jimmy Rapp (Alex Nicol). Less of a traditional western than a character study, Dawn at Socorro received better-than-usual reviews when it first came out in July of 1954.

Tris Coffin
as Man at table in saloon
View All

Critic Reviews for Dawn at Socorro

Though well-acted and presented as a character study, the predictable story was too weak to resonate any concern for anyone.

Audience Reviews for Dawn at Socorro

Entertaining western with a fine cast and striking cinematography.