Dawn Of The Planet Of The Apes2014 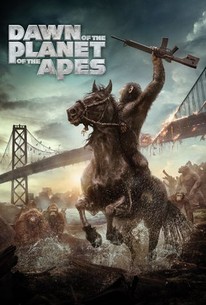 Critics Consensus: With intelligence and emotional resonance to match its stunning special effects, Dawn of the Planet of the Apes expands on its predecessor with an exciting and ambitious burst of sci-fi achievement.

Critics Consensus: With intelligence and emotional resonance to match its stunning special effects, Dawn of the Planet of the Apes expands on its predecessor with an exciting and ambitious burst of sci-fi achievement.

Critic Consensus: With intelligence and emotional resonance to match its stunning special effects, Dawn of the Planet of the Apes expands on its predecessor with an exciting and ambitious burst of sci-fi achievement.

Dawn Of The Planet Of The Apes Videos

Dawn Of The Planet Of The Apes Photos

A growing nation of genetically evolved apes led by Caesar is threatened by a band of human survivors of the devastating virus unleashed a decade earlier. They reach a fragile peace, but it proves short-lived, as both sides are brought to the brink of a war that will determine who will emerge as Earth's dominant species. (c) Fox

News & Interviews for Dawn Of The Planet Of The Apes

View All Dawn Of The Planet Of The Apes News

Critic Reviews for Dawn Of The Planet Of The Apes

Dawn of the Planet of the Apes is still the best big budget summer movie of 2014.

Dawn is not interested in staging conflict for the sake of it, and the misunderstandings and tensions that drive the plot don't always feel like contrivances.

They manage to accomplish what few reboots have: to tell an origin story that honors the original work and pleases the superfans, while working as involving, compelling cinema, on their own terms and free of all other associations.

[Dawn of the Planet of the Apes] is a text book example of how to stay true to the basic genetic code of a movie while also letting it evolve into a different, altogether more sophisticated beast.

Rise of the Planet of the Apes alone justified the advent of CGI. With it comes a worthy successor.

The film neuters any potential for the very type of stinging social commentary that was the original series' hallmark.

As pure escapism it can work, but it's reassuring to experience a film able to deliver both blockbuster visual thrills and characters you care about.

A smart movie about race, gun usage and xenophobia. Its masked in allegory but it doesn't shy away from big ideas and that's the thing that transforms it from a run-of-the-mill air conditioner flick to a thought provoking night and exciting at the movies.

Though it may be a single component to a larger picture, which will likely see director Matt Reeves return to finish off the tale, it's wholly enjoyable all by itself.

Serkis, and maybe even Kebbell, deserve awards attention here for their nothing short of inspiring performances.

[Andy Serkis] has become the Roddy McDowall of Planet of the Apes franchise, delivering the emotion and heart that makes Caesar come to life just like his predecessor did as Cornelius.

Epic and bold, it, in true Apes fashion, aims to examine the animal in man by looking at the more human side of the animals.

Audience Reviews for Dawn Of The Planet Of The Apes

Films in a franchise always have the desire to be on par or better than its predecessor(s), but there are the rare cases where a franchise seamlessly progresses its storyline, getting progressively better in terms of storytelling and build-up. This new iteration of the Planet of the Apes lore has done that in spades. Being very reminiscent of how The Lord of the Rings films were, each instalment seems to be getting better. 2014 was a great year for blockbusters, and Dawn of the Planet of the Apes was one of the best Hollywood productions that year. Improving on almost every aspect that had already given this trilogy a great start in Rise of the Planet of the Apes, this sequel was not one to miss out on. Although very subdued, this is an epic film in every sense of the word. I still love this film just as much today as I did back then. Here is why you should revisit this film or why it deserves your attention if you have not yet seen it. Picking up many years after the conclusion of Rise of the Planet of the Apes, this film follows Caesar once again, as he has lead his apes into the forest, where they've now created a home/civilization for themselves. Now accompanied by children and having sparked relationships over the years, it seems as though these apes have made a life for themselves, but the humans were not too far away. Just on the other side of the bridge lurks an army of humans who are just trying to survive after the takeover of the virus. Becoming a back and forth of trust between these new human characters and the apes, this film is all about its emotional core. Taking itself very slowly in order to build to a grand finale, Dawn of the Planet of the Apes may just be the best film this franchise has ever seen, even including the original classic. While the first film was a drama, it definitely played out as an action/thriller as well, and being a mere 105 minutes didn't hurt for its pacing either. Dawn of the Planet of the Apes may lose some viewers in either its pacing or its run time. At a lengthy 130 minutes in comparison to the first, this instalment does feel like a much heftier film. On top of that, it places the drama in the forefront, leaving the action as a secondary element, which made me love the film even more. Even though this was a personal plus side for me, I can easily see how that would bore some viewers. The screenplay was terrific for this film, calling back just enough from the previous film in order to earn the stamp of sequel. This is the type of sequel that you can jump right into and enjoy from star to finish, as they give enough explanation as to what has happened in the past so that this could be the first film in the franchise. When Rise of the Planet of the Apes was released, people definitely showed some praise for the motion capture work of the apes, but this instalment improved on that in almost every conceivable way. There were many noticeable moments in the first, but the apes throughout Dawn of the Planet of the Apes seem to be flawlessly integrated into the scenery. Critics and audiences have called recent films like The Jungle Book the most impressive look to computer generated animals, but I still believe this franchise may hold that title. The motion capture work here is terrific and Andy Serkis' performance as the leading ape (Caesar) is really something noteworthy. A Film is only as good as its screenplay, and when you're the second film in a rebooted franchise, there is a very tall order in terms of what can work as a fresh storyline. When films like this have been around for as long as they have, sometimes a simple story of trust is all you need in order to build some great characters throughout a two hour film. Dawn of the Planet of the Apes still stands as one of the greatest Planet of the Apes movies out there. I love every minute of this film. There may be a few scenes that drag on a little too long, but I truly can't think about much else to complain about. This is a superbly crafted blockbuster from start to finish. Can't wait for the conclusion in War for the Planet of the Apes.

Matt Reeves' Dawn of the Planet of the Apes travels down the dark path. Swinging in at 2 hours, Dawn of the Planet of the Apes has a solid mixture of story, character, and action. Things are predictable and there are times when the plot details become tedious; however, as a whole, this picture comes together. It can be said that this picture relies heavily on CG, and yes it does. All can be forgiven if done the right way and this film does it the right way. The motion capture and the presentation of the apes are spectacular in their own right; almost as if they are standing right there with the rest of the actors. The human characters serve as a good contrast to the apes, which is much welcome. Watching 2 hours of apes just wouldn't be the same. Jason Clarke, Gary Oldman, and Keri Russell have the major human characters to follow. Dawn of the Planet of the Apes never brings the suspense or excitement, yet it is still a recommendable piece.

While I enjoyed Dawn, something seemed off to me that I can't explain. I really liked Rise and this was just so different from that film and it caught me off guard. The action and special effects are absolutely terrific as are the performances, but the story did not touch me like Rise managed. Still a very good sequel worth watching, but I preferred Rise. I am certainly interested to see where they take the series from here. I don't think this series has ever seen this much popularity and critical acclaim among the mainstream audiences.

An outstanding, riveting sequel to the very flawed "Rise of the Planet of the Apes", concerning the last chance humanity, led by the believer Malcolm (Jason Clarke), have with mending their torn relationship with the apes, led by the charismatic Caesar (Andy Serkis). Where the first movie lacked interesting characters and brilliant twists in plot development, this movie more than makes up for it and some. Serkis, who has one of the most unique careers in the business, is absolutely breathtaking once again, where he raises the character of Caesar to "cult icon" status given the depth and muscle of his performance. The special effects, as expected, are phenomenal, but the real treat here is seeing how the story develops, and even if it gets a little left-wing, anti-gun at times, that is pretty much one of the only flaws the movie has. For the most part, this is a rip-roaring film worthy of the hype surrounding it.

Dawn Of The Planet Of The Apes Quotes