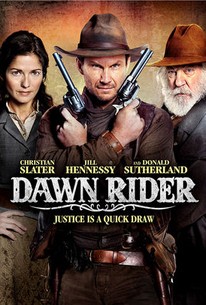 A man searching for his father's killer learns that the culprit has been standing right there in front of him since the very beginning in this gritty revenge western starring Christian Slater and Donald Sutherland. John Mason and his estranged father have just reconnected for the first time in years when their train comes under attack by a gang of violent bandits. In the chaos, John is badly wounded and his father is killed. Later, while convalescing at a local ranch, John falls for the beautiful Alice (Jill Hennessey). But just as John prepares to lay the past to rest he learns that Alice's brother is the man who shot his father, and vows to seek vengeance. ~ Jason Buchanan, Rovi

Douglas Chapman
as Chase
View All

There are no critic reviews yet for Dawn Rider. Keep checking Rotten Tomatoes for updates!

With a western from Tarantino and a big budget "Lone Ranger" adaptation due next year, many are predicting a revival of the genre. Along with horror, it's my favorite genre so I'm hoping this will be the case. Unlike the horror movie, it's very hard to make a bad western. It's a peculiar genre in that the more you exploit it's cliches the better a film you'll produce. There are only a handful of storylines in the western so it gives film-makers a certain freedom. No-one expects any originality in terms of plot thus allowing a focus on character and subtext. Two directors could tell the exact same story as a western but imbue it with two wildly contrasting messages. In the forties, film-makers like Hawks and Ford latched onto the genre for this reason, plucking it out of it's B-movie ghetto and into the arena of respectability. But of course the genre began simply, telling quaint tales of men in white hats fighting men in black hats on cheaply constructed backlots. This movie harks back more to the B-westerns of the thirties than to the classic era of the fifties or the Spaghettis of the sixties. In fact this is actually a remake of just that, a cheapie from 1935 which starred John Wayne at a time when he was churning these out. The great news is that director Miles has done justice to the genre on a relatively modest budget. The story of course is nothing new but he gets the best from his cast and uses the stunning British Columbia locations to add an extra dimension of class. It's a long time since former Young Gun Slater has turned in a decent performance but he seems to be really enjoying his role in this. He gets lots of cheesy lines but delivers them with just the right amount of knowing. It's good to see that Jack Nicholson smirk back in full abandon. Sutherland has a small part but is great as the bounty hunter on Slater's tail. The best performance is courtesy of Hennessy, playing a feisty heroine like a foul mouthed Maureen O'Hara. Some actors are meant for certain genres and Hennessy is a perfect fit for the western. The sets, locations and costumes will satisfy the most purist of western fans. The Klan-like masks worn by the outlaw gang is a nice homage to the villains of "Django". A jailhouse scene uses the same subtle use of prison bars as Michael Mann's "Manhunter". Though Slater is the captive, it's his jailor who is framed behind the bars, suggesting who is really in control here. I often criticise digital video as a format because it's all too often used badly. There's a certain skill needed to prevent your movie looking like a porno or a wedding video and cinematographer Norm Li possesses that skill. There are some truly beautiful shots on display, a scene on a bridge particularly striking. For too long, low budget film-makers have opted for the horror genre but lately we've been seeing something of a revival of the B-western. If it's a choice between a gunfight in the old West or a torture scene in Eastern Europe I know which one I'll pick every time. If the western is coming back you can deputise me now, I'm ready for the big showdown.