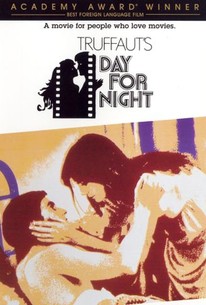 Critics Consensus: A sweet counterpoint to Godard's Contempt, Truffaut's Day for Night is a congenial tribute to the self-afflicted madness that is making a movie.

Critics Consensus: A sweet counterpoint to Godard's Contempt, Truffaut's Day for Night is a congenial tribute to the self-afflicted madness that is making a movie.

Critic Consensus: A sweet counterpoint to Godard's Contempt, Truffaut's Day for Night is a congenial tribute to the self-afflicted madness that is making a movie.

Known to English-speaking audiences as Day for Night, La nuit américaine was director François Truffaut's loving and humorous tribute to the communal insanity of making a movie. The film details the making of a family drama called "Meet Pamela" about the tragedy that follows when a young French man introduces his parents to his new British wife. Truffaut gently satirizes his own films with "Meet Pamela"'s overwrought storyline, but the real focus is on the chaos behind the scenes. One of the central actresses is continually drunk due to family problems, while the other is prone to emotional instability, and the male lead (Truffaut regular Jean-Pierre Leaud) starts to act erratically when his intermittent romance with the fickle script girl begins to fail. In addition to all this personal drama, the film is besieged by technical problems, from difficult tracking shots to stubborn animal actors. The inspiration for future satires of movie-making from Living in Oblivion to Irma Vep, La nuit américaine was considered slight by some critics in comparison to earlier Truffaut masterworks, but it went on to win the 1973 Oscar for Best Foreign Film. ~ Judd Blaise, Rovi

Christophe Vesque
as Boy with Cane in Dream Sequences

News & Interviews for Day for Night

The Blacklist, Once Upon a Time, and More Available on DVD This Week

View All Day for Night News

Critic Reviews for Day for Night

Day for Night is tender but too fan-magazinish in approach, too tenderly shallow for its own good.

A glorious ode to the fleeting, addictive and irreplaceable joys of cinematic collaboration...

It is a Pirandellian affair, an elegiac celebration of a dying kind of cinema, a meditation on the connection between film and life by Truffaut...

It is a breezy, richly enjoyable if not especially profound film about cinema: it conjures the ambient, dizzy sexiness of movie artifice, and it's also notable for a remarkable cameo by Graham Greene.

It's a hilarious and informative movie, and in the pantheon of films about filmmaking, it strikes a neat balance between the operatic neuroses of '8 1/2' and the warm, pastel-hued nostalgia of 'Singin' in the Rain'.

Truffaut is looking at the world from inside a glorious obsession: everyone outside looks a little gray and dim.

Truffaut's Day For Night is a wonderfully funny evocation of the psychic netherworld in which film crews operate.

The film is a combination guided tour and gossip column, documentary and exposé, guaranteed to please both young people interested in making movies and older folk curious about the mysteries of the film studio.

[Day for Night is] universal in its sheer humanism, its exuberance, its tragic-comic view of people and events, and completely irresistible in its sheer love of the life it leads.

Somehow, in taking us behind the curtain of how movie magic is made, Truffaut gives us even more magic. Sometimes the process is just as interesting as the product.

A sometimes exasperated, sometimes melancholic meditation on the artistic process, Day for Night is one of the greatest love letters to filmmaking ever made.

Aggravating to the more seriously-minded auteurs of the French New Wave, Truffaut's film is nevertheless a deeply personal, warm and human tribute to the passion of cinema.

Audience Reviews for Day for Night

It's very interesting that the English release of this film was not a direct translation of the French title which would have been "The American Night" Truffaut brings a nice mix of humour into yet another film about film making.

A great view about the charm, conflict, love, family and life in cinema. A cinematography poem to the artists of the seventh art. A better and more serious version of 'Noises Off' with very good actings of all the cast. Fresh.

From the opening credits to the last frame it is great fun to see behind the scenes of the making of a movie. What is going on in the cast's and crew's private lives and how it affects the movie being made was the most interesting thing though. The many uninterrupted tracking shots following Truffaut as a writer/director named Ferrand, who for all intents and purposes is Truffaut, are amazing in their fluidity as he answers production questions from everyone who crosses his path. Jacqueline Bisset as a visiting American/British star in the French production of Meet Pamela is beautifully natural in her role. Jean-Pierre Aumont as the mature actor is also likable and charming. Nathalie Baye stands out in her hard working, strong, and attractive role as a script girl who seems to have more responsibilities than the assistant director. Jean-Pierre Leaud and Dani are good as a young immature couple, he the other lead with Bisset's and Aumont's characters, she getting an assistant continuity job through him. Valentina Cortese is an aging actress who is turning more and more to drink. Bernard Menez, the prop man, is quite funny. There are producers, other actors, more crew, paparazzi, and extras as well. Movie sets are controlled places where stories are committed to celluloid, not like real life. Still unexpected occurrences like trying to film animals, actresses becoming pregnant, emotions becoming unstable because of actors' private relationship troubles, and sudden death lead to changes being made to the script all along the way. One theme is the love of movie making, which we see throughout. Another is relationships between the sexes. When Alphonse (Leaud) asks Julie (Bisset) his repeated question "Are women magic?" she replies, "Everyone is magic. And no one is." By giving the actors and the crew the same attention, by giving the making of Meet Pamela the same attention as the off camera lives of those involved, and by giving several actresses roles as strong or stronger than many of the men have, Traffaut shows that he truly believes "Everyone is magic. And no one is."

Why not give Truffaut a big budget and let him play with it? Why not indeed. La Nuit Americaine is the director's own account of life on the set, of the process of making a film, with all of its difficulties and its perks. With the help of dozens of charming, excellently written characters and the development of many different threads to a common storyline, he exemplifies the laughter and the tears and the interconnexion of humanities that the process of flimmaking implicates. Where Godard was ambiguous and Fellini was grandieuse (I'm talking Le Mepris and 8 1/2, respectively), Truffaut is subtle, good-hearted, and intimate (as he always is). Filmmaking is a personal, consuming project, and he chooses to portray even the most technical aspects of it which, any other director might have thought, could have been unappealing to an audience. Truffaut finds the humor and soul behind every task, as he does in his absurd plot deviation about his film's star's, Alphonse's, romantic obsession with one of the girls working on the movie. Jean Pierre Leaud is just as great as he always is playing the neurotic, insecure, obsessive Alphonse with a charming sense of comedy. Jacqueline Bisset is ethereal as she drifts through the movie, in a role of another, different neurotic. The same can be said of Valentina Cortese and Jean-Pierre Aumont, whose deep conviction of their having big screen presences only causes them to become legends in front of our eyes. During La Nuit Americaine Truffaut is so full of fascination, and admiration, and pride for what he does, that in the end the feeling is that of having just heard a good friend, or many good friends, speak about their jobs as directors, assistants, actors, make-up artists, or producers. There is an endless possibility of identification with their feelings, situations, attitudes. Day for Night is a film to inhabit and love. The film opens with a fantastic long shot that I will never forget. The note is happy. The music is beautiful. La Nuit Americaine is the best form of escapism.