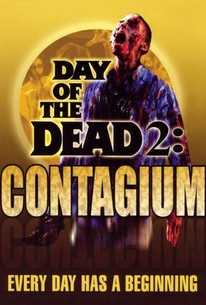 Day of the Dead 2: Contagium Photos

An unexplained viral outbreak returns to haunt those who had covered up the bizarre incident in this in-name-only sequel to George A. Romero's downbeat zombie classic Day of the Dead. When a deadly virus befalls the patients of a Pennsylvania military hospital in 1968, the government attempts to erase all evidence of the deadly plague by destroying the patients and cremating everyone who has been exposed. As years pass and the former military hospital is transformed into a civilian mental treatment center, the legend of the mysterious virus becomes little more than urban legend to the unsuspecting patients. Of course old legends die hard, and when the long-forgotten virus once again surfaces in the remote hospital, it won't be so easily contained the second time around.

Critic Reviews for Day of the Dead 2: Contagium

Skip this giant piece of fly infested excrement and watch the original masterpiece.

...an unmitigated disaster of epic proportions...

Audience Reviews for Day of the Dead 2: Contagium

not a bad movie.....but it is aTERRIBLE movie. Probably couldnt be paid to see it again.

A great film for gore and a good plot on the zombie process.

Day of the Dead 2: Contagium Quotes