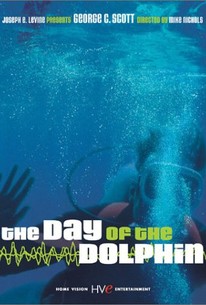 The Day of the Dolphin Photos

Director Mike Nichols and screenwriter Buck Henry team up again (after collaborating on The Graduate and Catch-22) for this adaptation of Robert Merle's best-selling adventure novel concerning dolphins who become pawns in a plot to kill the president. George C. Scott plays Dr. Jake Terrell, a researcher who, along with his wife Maggie (Trish Van Devere), is investigating dolphin intelligence, believing they have the capability of speech. Harold DeMilo (Fritz Weaver), in charge of a major corporation, sponsors their work. But undercover work by government agent Curtis Mahoney (Paul Sorvino) reveals that DeMilo is working with a right-wing group planning to kidnap the dolphins and use them to blow up the presidential yacht. Jake and Maggie have to race against time to save both their dolphins and the president.

Pat Englund
as Woman at Club

Julie Follansbee
as Woman at Club

Brooke Hayward
as Woman at Club

Florence Stanley
as Woman at Club

Critic Reviews for The Day of the Dolphin

A glibly sour and sentimental thriller.

What is left, besides a lot of pretty dolphin footage, is some bad intercollegiate-revue satire, a shadow of Sea Hunt, and a calculated sentimentality that evokes memories of Lassie Come Home.

A rare and regrettably uneven combination of ideas and action.

A bizarre and often ridiculous attempt to merge documentary, suspense and comedy.

Some of the cloak-and-dagger stuff that follows is so awkwardly staged that it's difficult to know whether the simplicity was designed for youngsters or as parody.

Tries so hard not to be a conventional science-fiction thriller that it fails, alas, to be anything.

An atypical mix of scientific drama and political thriller.

Worst of all is the suspense plot, simplistic enough to be rather more laughable than the high-pitched, anile voice in which the bottle-nosed dolphin (Tursiops truncatus) shrills his truncated banalities.

A strange hybrid of family film and adult drama, this ends up playing like Flipper Meets The Parallax View.

An enjoyable curiosity that manages to combine elements of Flipper, Truffaut's Wild Child, Lad, A Dog and Executive Action with absolutely no fear of the consequences of such an antic concoction.

This movie might be accused of lacking any real sense of porpoise but Georges Delerue's score is a high point.

Audience Reviews for The Day of the Dolphin

Being as its plot is centered on talking dolphins that are unknowingly trained to assassinate the president, you'd think that "The Day of the Dolphin" would be a total exercise in camp, but it's almost the exact opposite. It takes itself so darn seriously that there's absolutely nothing fun or enjoyable about it. Also, the narrative is bumbling and borderline incoherent, the editing is clumsy, there's not a single likable or relatable character among the bunch and the first three fifths are mindless exposition that build up to literally nothing. Even if it is visually enticing, "The Day of the Dolphin" is a complete bore.

The movie taglines says "Unwittingly he trained a Dolphin to kill the president of the United States" and so naturally I sat down to watch it. With a ridiculous tagline like that you would expected something over-the-top and goofy right? Sadly you're wrong as this movie takes itself too seriously and simply a bores you to death. The Day of the Dolphin is about a scientist who trains his Dolphin to talk who are than kidnapped by the government to kill the president. That synopsis in the last sentence is literally all that happens and nothing else interesting develops. It has boring characters, uninteresting back stories, and is surprisingly very dramatic. You'll wonder how in the world did a movie about talking Dolphins get to a point where the government are kidnapping Dolphins and planning to kill blowup the president. The answer is simply lazy writing. For a movie that has talking Dolphins I'm surprised at the lack of humor and for a movie with Dolphin in the title they're barely are shown doing anything interesting. Most of the times the Dolphins are doing tricks and swimming, yawn. Would you believe that there's only one scene of the Dolphins being trained to kill anything, and unfortunately they don't have machine-guns or anything over-the-top for your amusement. Though to the film credits it did attempt to make it realistic, while it does have Dolphins that sound like Elmo from Sesame Street, the scenario is somewhat plausible. The plot is ultimately poorly written, but I honestly can't say I expected something good that has talking Dolphins. The acting is surprisingly good, though the actors do have the "I'm going to fire my agent" train of thought. The music is also good, though completely useless here as it never used effectively. Now since we have a scientist training a Dolphin to talk, you get to hear tape samples of it, like of them in the same scene. Yes the tape of the Dolphin speaking is annoying, but they are unintentionally funny to listen to. The director on the other hand does not know how to make a thriller. You'll see events coming miles away and nothing is ever suspenseful since the movie does a good job of boring you to death. Now for some reason this is categorize as science-fiction, why? Sure the movie has talking Dolphin, but I don't think that would count it as science-fiction and there's a lack of both science and fiction in this. To my amazement there's a novel with the same name and would you believe it's a political satire of the Cold War. That would actually would have interesting to watch if the movie actually decided to follow the novel. Now while this might unrelated to this movie there's is a Simpson parody title "Night of the Dolphin" that's more entertaining to watch. The Day of the Dolphin is a serious movie with a premise that shouldn't have been taken seriously in the first place. You're better off reading the political satire novel with the same name or watching The Simpsons parody "Night of the Dolphin".

The Day of the Dolphin Quotes