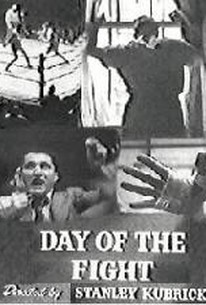 Day of the Fight is a 15-minute short documentary about the middleweight Irish boxer Walter Cartier. While working as a photographer for Look magazine in the late '40s, Stanley Kubrick encountered Cartier through a photo shoot and article entitled "Prizefighter." Inspired, Kubrick met with him and created his first film, which was then purchased by RKO. Narrated by news reporter Douglas Edwards, the film follows the boxer and his twin brother, Vincent Cartier, during a typical day of eating, praying, and preparing to fight. The conclusion involves a fight against Bobby James, which was filmed live in 1950 at Laurel Gardens. Day of the Fight premiered in 1951 as part of RKO-Pathé's "This Is America" series.

Critic Reviews for Day of the Fight

Audience Reviews for Day of the Fight

Kubrick's very first film, this short gives us just the tiniest peek at the future techniques of what was soon to become one of moviedom's greatest directors. Shot in the style of a "March of Time" newsreel (in fact, one of its former producers was involved in this film's creation), Kubrick's legendary attention to detail is remarkably evident (especially in the religious artifacts that surround our "hero," the prizefighter Walter Cartier), and has a certain "eerieness" (which was to become a trademark of Kubrick's) in its bizarre fascination with Cartier's ever-present twin brother. Recommended, especially for Kubrick fans.

You can see the immerging talent behind the lens. One of Kubrick's early works.

If it wasn't for the name Kubrick this 1 reeler would likely be lost. You can see some very early Kubrick style in the composition of shots and in one particular shot involving a stool. You can see it at http://www.hollywoodsaloon.com/podcastEP36-4.html

Day of the Fight Quotes