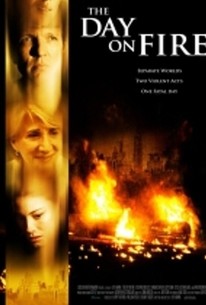 Five people cross paths in New York City over the course of a day marked by violence in this independent drama from writer and director Jay Anania. Judy (Judy Kuhn) is a singer who is busy in a recording studio working on an album of British folk songs with jazz keyboardist John Medeski. Shira (Alyssa Sutherland) is a successful fashion model doing a photo shoot. Najia (Carmen Chaplin) is a journalist from Palestine who is in the United States working on a piece on treating victims of wartime violence, and she's arranged an interview with a well-respected doctor, Dr. Mary Wade (Olympia Dukakis). And Walter (Martin Donovan) is a quiet man who enjoys spending time in the park observing others. When a Palestinian suicide bomber sets off an explosive charge on a busy Manhattan street corner, all five characters are forced to deal with the physical and emotional wreckage of its aftermath. Day on Fire was screened as part of the "Visions" series, devoted to challenging works from new filmmakers, at the 2006 Toronto Film Festival.

Critic Reviews for Day On Fire

Pic holds to a dreamy mood and a radical aesthetic but, in the end, the extremely repetitive use of certain sound and images has truly diminishing returns.

...a thunderously boring endeavor that generally serves as solid proof that Anania flat-out hates his audience.

There are no featured reviews for Day On Fire at this time.