The Day Reagan Was Shot2001 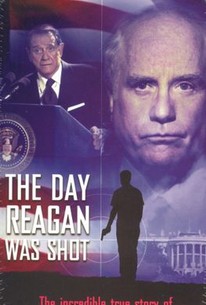 The Day Reagan Was Shot Photos

Oliver Stone served as executive producer for this made-for-cable drama that looks back at the events of March 30, 1981, when John Hinckley, Jr. attempted to assassinate then-president Ronald Reagan. Richard Crenna stars as Reagan, Christian Lloyd plays Hinckley, Richard Dreyfuss portrays Secretary of State Alexander Haig (who infamously proclaimed himself "in charge here" after the shooting) and Holland Taylor appears as Nancy Reagan. Produced for the Showtime premium cable network, The Day Reagan Was Shot was first aired on December 9, 2001.

John-Patrick Mavric
as Stranger
View All

Critic Reviews for The Day Reagan Was Shot

... as stylish as Thirteen Days when executive producer Oliver Stone isn't hitting us with his big stick.

The movie belongs to Dreyfuss, who not only conveys a thirst for powe, but conjures empathy for a man who would indeed fall on his sword for the good of his country.

A boring and over-the-top exploitation of a day a president was nearly killed and his government was sent into chaos.

Audience Reviews for The Day Reagan Was Shot

There are no featured audience reviews yet. Click the link below to see what others say about The Day Reagan Was Shot!

The Day Reagan Was Shot Quotes