A Day Without a Mexican2004 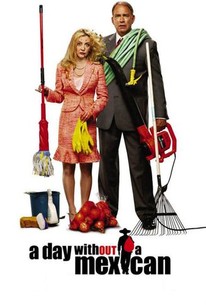 Critics Consensus: A Day Without a Mexican is a preachy and heavy-handed satire that fails to deliver anything of substance.

Critics Consensus: A Day Without a Mexican is a preachy and heavy-handed satire that fails to deliver anything of substance.

Critic Consensus: A Day Without a Mexican is a preachy and heavy-handed satire that fails to deliver anything of substance.

A Day Without a Mexican Photos

Marking the directorial debut of Sergio Arau, son of Like Water for Chocolate director Alfonso Arau, A Day Without a Mexican ponders the potentially catastrophic results that would occur if California-based Mexicans, who make up over a third of the state's population, were to suddenly disappear. The mockumentary postulates that the lack of Latino gardeners, nannies, cooks, policeman, maids, teachers, farm workers, construction crews, entertainers, athletes, and the world's largest growing consumer market would create a social, political, and economic disaster, leaving the concept of the "California Dream" in shambles. A Day Without a Mexican proved controversial even before its release: promotional billboards reading "On May 14th, there will be no Mexicans in California" caused a stir with immigrant rights groups, who believed the sign was a statement against the Latino community. The film stars Yareli Arizmendi, John Getz, Maureen Flannigan, and Muse Watson.

Critic Reviews for A Day Without a Mexican

As many times you consider A Day Without a Mexican a crude and underdeveloped parody, there are moments that it vindicates itself with on-the-money situations.

The movie in its extended version is frequently muddled, emotionally messy, a little heavy-handed and misses the real opportunity presented by the new format.

Charming if amateurish farce of a movie.

By the film's end, we're more beleaguered than enlightened.

The tone is often that of a preachy after-school special, down to the instructional messages that regularly flash across the screen.

Arau has expanded his satirical short from 1998 into one joke that he solemnly beats to death for 100 minutes.

Feels scattered, and inept, and takes a golden opportunity slamming it into the floor.

For the first hour director Arau ... and his co-writer and wife, actress Arizmendi, negotiate the story's tricky mix of comedy, social satire and science fiction with surprising aplomb.

A cheap-looking, one-joke movie that can't get any laughs even in its first telling.

A promising premise without a successful follow-through...vacillates between preachy tract and bland comedy.

The film suffers from low-budget-and-looks-it production values and some ridiculous aspects of the plot, even for a fantasy like this.

Audience Reviews for A Day Without a Mexican

Starts out funny, and then just stays rather boring...

I know I've seen this movie but it was pretty forgettable.

Like a Saturday Night Live skit that plays for 2 hours. I'm glad that Sergio Arau shows how if Mexicans were to dissapear all the low level jobs would have to be done by white people. Thatnks for setting back any progress Mexican Americans have made with your unfunny movie.

[font=Century Gothic]"A Day without a Mexican" is a film about a mysterious fog enveloping the state of California. Then, the entire Hispanic population disappears without a trace. Needless to say, this causes quite the disruption on the personal, economic and cultural levels. Even the border patrol agents are hurt.[/font] [font=Century Gothic][/font] [font=Century Gothic]"A Day without a Mexican" is not bad and well-intentioned with some good points on identity and racism. It raises the question about whether or not somebody can truly be illegal. But pedestrian writing and amateurish acting pretty much lower the whole enterprise to the level of a public service announcement. [/font]

A Day Without a Mexican Quotes