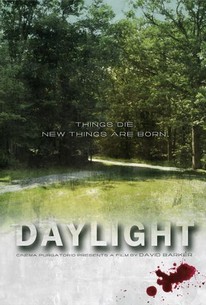 On their way to a wedding, Danny and Irene pick up a hitchhiker - throwing the film in the direction of the conventional rural kidnapper thriller. But with the skill of director David Barker and his miraculous cast and crew, Daylight emerges as much, much more than just another exploitation picture. Kidnappers Renny, Leo, and Murphy enact a bizarre and terrifying ritual of politeness, endowing such scenes as the passing of a bread knife at a kitchen table with a threat of ferocious violence - but also trust. Alexandra Meierhans - pregnant as the character Irene, and pregnant in real life - delivers an astonishing performance as the female lead. Simultaneously vulnerable and dangerous, a captive and a seductress, she somehow struggles to survive and endure, bringing the audience along with her through to the shattering conclusion. -- (C) Cinema Purgatorio

Replete with superior acting and visual splendor, the film is a fine instance of the overly familiar made fresh.

An unusually delicate psychological thriller that favors suggestion over exposition.

Barker's screenplay demonstrates a conviction that its genre can command great importance, allowing it to transcend the easy shocks associated with the exploitation movie experience and create an entirely fresh rhythm.

Barker leaves the histrionics to other thrill-makers, opting for the excruciating slow boil.

Thanks largely to the exceptional actors, particularly Martin and Meierhans, Barker sporadically infuses fresh life into stale cliches, and even makes a few of them truly compelling all over again.

Punctuating views of the bucolic countryside and sky attest to nature or God's indifference to human suffering, but such formalist touches don't overwhelm the responsive ensemble work in this resourceful, taboo-prodding sickie.

It's actually got a novel idea, a handful of legitimately creepy moments, and an admirable sense of Twilight Zone-style madness

An icy and humorless -- but entirely suspenseful -- film that works mostly because of its unpredictability.

Daylight is a caper full of lechery and unforced twists with strong characters and no pretense.

Perpetually torn between its philosophical ambitions and horror-film roots, Daylight suffers from a debilitating identity crisis.

There are no featured audience reviews yet. Click the link below to see what others say about Daylight!