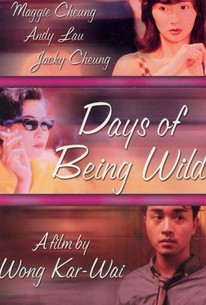 Critics Consensus: Days of Being Wild uses a young man's struggle to come to terms with a family secret as the foundation for a beautifully filmed drama with a darkly dreamy allure.

Critics Consensus: Days of Being Wild uses a young man's struggle to come to terms with a family secret as the foundation for a beautifully filmed drama with a darkly dreamy allure.

Critic Consensus: Days of Being Wild uses a young man's struggle to come to terms with a family secret as the foundation for a beautifully filmed drama with a darkly dreamy allure.

Days of Being Wild (A Fei zheng chuan) Photos

Set in 1960, the film center of the young, boyishly handsome Yuddy (Leslie Cheung), who learns from the drunken ex-prostitute who raised him that she is not his real mother. Hoping to hold onto him, she refuses to divulge the name of his real birth mother. The revelation shakes Yuddy to his very core, unleashing a cascade of conflicting emotions. Two women have the bad luck to fall for Yuddy. One is a quiet lass who works at a sport arena named Su Lizhen (Maggie Cheung), while the other is a glitzy showgirl named Mimi (Carina Lau). Perhaps due to his unresolved Oedipal issues, he passively lets the two compete for him, unable or unwilling to make a choice. As Lizhen slowly confides her frustration to a cop named Tide (Andy Lau), he falls for her. The same is true for Yuddy's friend Zeb (Jacky Cheung), who falls for Mimi. Later, Yuddy learns of his birth mother's whereabouts and heads out to the Philippines. ~ Jonathan Crow, Rovi

Critic Reviews for Days of Being Wild (A Fei zheng chuan)

Needless to say a must-see for Wongcolytes, Days of Being Wild is also an excellent entry point for people who haven't yet caught this most exotic and habit-forming of cinematic bugs.

Every shot is perfectly composed and compelling, with light and shadow manipulated to maximum effect.

It now seems like a promising apprentice work, almost a blueprint for the writer-director's most acclaimed and famous film, In the Mood for Love.

There are images in Days that can make your heart stop for no other reason than that they're perfect.

It may have been released in the olden days of 1991, but Wong Kar-Wai's Days of Being Wild remains pulsatingly contemporary.

A triumph of movie pop poetics.

Days of Being Wild seems to take place under the cover of night, or at least underneath thick humid clouds.

Watching Days of Being Wild today, all those feelings unfurled like one of the tortured romances on screen, the ache striking you in a different part of your heart.

These days are both electric and exhausted.

Twelve years after first seeing Days of Being Wild, I'm finally developing some fondness for it.

Audience Reviews for Days of Being Wild (A Fei zheng chuan)

Wong Kar Wai and Maggie Cheung. Together, a project couldn't possibly go off the ropes and it doesn't here. Those who saw In the Mood for Love should treat themselves to early Wai.

In the Mood for 2046. Only just hints at what is to come from Wong Kar Wai. Heavy with atmosphere and loathesome characters.

Wong Kar Wai sets up his template for his future masterpieces. Doyles cinematogrophy adds a great layer and texture to the piece. This isn't a tale for everybody the pursuits for companionship only end in sadness and heartbreak. While not Wais best it has echoes of the greatness to come.

Days of Being Wild (A Fei zheng chuan) Quotes