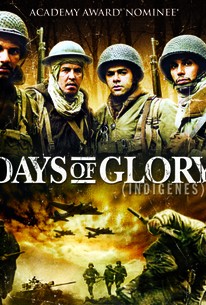 Critics Consensus: Days of Glory is a powerful historical epic that pays homage to a valiant group of soldiers whose sacrifices have largely been forgotten.

Critics Consensus: Days of Glory is a powerful historical epic that pays homage to a valiant group of soldiers whose sacrifices have largely been forgotten.

Critic Consensus: Days of Glory is a powerful historical epic that pays homage to a valiant group of soldiers whose sacrifices have largely been forgotten.

Time period: 1944-1945. The liberation of Italy, Provence, the Alps, the Rhone Valley, the Vosges and Alsace marked vital stages in the Allied victory. And, in the place that France was able to take among the Allies following the Armistice. This victorious and bloody march on Germany was carried out by the 1st French Army, recruited in Africa to sidestep the German occupiers and the officials of the Vichy regime: 200,000 men, including 130,000 "natives" comprising 110,000 North Africans and 20,000 Black African. The rest of the force was made up of French North Africans and of young Frenchmen who had fled the Occupation. This is the forgotten story of the so-called "native" soldiers.

News & Interviews for Days of Glory

View All Days of Glory News

Critic Reviews for Days of Glory

Days of Glory has some exceptional performances by its lead actors.

Instead of guys named Danny and Polack and Sol and Brooklyn, you've got guys named Said and Yassir and Messaoud and Abdelkader. But it's the same deal. Prick them, do they not bleed? Blow them up, do their limbs not scatter and their guts not spill?

Its message is dimmed by a procession of war and race movie clichés that even the excellent cast and epic cinematography cannot revive.

A war film more of sober, grim reflection than balls-out escapades. Yet it grips consistently, its bursts of combat delivering gut-punches of veracity.

An exquisite look into a rarely examined aspect of WWII, full of behavioral examinations and informative messages.

As a war movie "Days of Glory" is competent although not extraordinary. But if you like war movies you'd be crazy not to watch it.

All the upright morality in the world doesn't compensate for poor filmmaking.

As by the numbers as it sometimes becomes, those very clichés also emphasize the fact that we haven't seen these men in this setting before.

Like most every great war movie, it combines intense action with human drama. There's also several overtly preachy scenes that accomplish little to further the story but they underline the already clear message.

The horror of "Days of Glory" is that its hate and tolerance are not relics from the past, but are as real today as the flickering shadows on the screen.

Audience Reviews for Days of Glory

Days Of Glory is a grim reflection on the events of World War II from the perspective of the unrewarded bravery and loyalty of colonial Algeria to liberate France from Germany. Passionate. Straightforward. Historically important.

Being ignorant of this historical warfare, I was absolutely lost in the beginning. I couldn't understand why X was fighting for Y against Z unless X was ruled by Y. But I was able to get hold of it soon. But I wasn't able to understand several things. Why Sergeant Martinez recommended Abdelkader for promotion even after getting into a fight with him and with all their differences? Why would Said stake his life for Sergeant after he wants him to go to hell? Okay, I can take it that one or two of 'em have an all-of-a-sudden change of heart. But what's shown here is too hard to digest. Seemed like the makers lost their tabs on logic while trying to show/be clear enough that their intentions were pure. Of all the actors, Abdelkader was the best.

Inspired by actual events, Indigenes is the story of Arab soldiers serving in the French Foreign Legion in WWII. Director Rachid Bouchareb oversees a talented cast that brings to light the exploits of these obscure, almost forgotten heroes. A history lesson that everyone should see.

"The true story of World War II's forgotten heroes" During WWII, four North African men enlist in the French army to liberate that country from Nazi oppression, and to fight French discrimination.

REVIEW
This riveting, poignant, deeply ironic docudrama tells the story of the 7th Algerian Infantry Division, a battle unit composed of Arab Algerians, mobilized, trained and led by French officers, that took part in the invasion of Italy and southern France to liberate these territories from the Nazis in 1944-45. It is war writ small, up close and personal. The focus is relentlessly cast upon the fortunes of the men in a single squad. Noteworthy is the subtext of unequal, discriminatory treatment of the Algerians, compared to French soldiers (e.g., inferior food, no leave). In that regard, the film prefigures circumstances that led eventually to the Algerian war of independence from France years later. The ensemble acting is nothing short of stupendous. Deeply etched character studies are offered by Jamel Debbouze (humble Saïd, the youngest, the man with the withered arm), Samy Naceri (Yassir, the protective big brother), Roschdy Zem (Messaoud, the marksman who falls in love with a French woman), Sami Bouajila (the ambitious natural leader, corporal Abdelkader) and Bernard Blancan (Sgt. Martinez, the French Algerian squad leader). This group jointly received the Best Actor award at Cannes last May. I think that "Glory" ranks with the very best war movies made in the modern era, right up there with films like Oliver Stone's "Platoon," Steven Spielberg's "Saving Private Ryan," and Clint Eastwood's "Letters from Iwo Jima." I wouldn't argue with anyone who claims that "Glory" is the best of the lot.