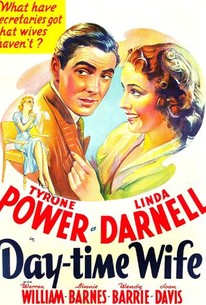 The extramarital shenanigans of a young married couple provide the basis of this surprisingly racy (for 1939 Hollywood) comedy. The trouble begins on the couple's second anniversary when he calls to say that he will be held up at the office. Later the wife finds lipstick on his collar and becomes very suspicious so she goes to her more worldly best friend who advises the distraught wife to go out and get a job so she can turn the tables on her husband. She ends up working for a lusty architect and sure enough he makes it very clear that he likes the way she is built. The two go out for dinner one night and who should they run into but her husband and his secretary out for a little tete-a-tete. The foursome end up in the architect's penthouse and everyone has a wonderful time until the architect's wife shows up.

There are no critic reviews yet for Day-Time Wife. Keep checking Rotten Tomatoes for updates!

I liked how funny it was, but I didn't like how predictable it was.

Lighter than air comedy with handsome Tyrone and sprightly lovely Linda, Binnie Barnes is a hoot as the wise friend, hard to believe Linda Darnell was only 15 when this was filmed.