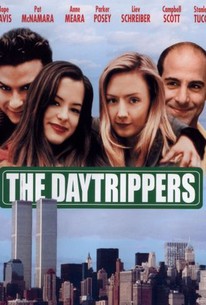 Critics Consensus: Its modest scale and scabrous sense of humor may feel more punishing than funny for some, but an excellent cast and authentic sense of place make The Daytrippers a smooth ride.

Critics Consensus: Its modest scale and scabrous sense of humor may feel more punishing than funny for some, but an excellent cast and authentic sense of place make The Daytrippers a smooth ride.

Critic Consensus: Its modest scale and scabrous sense of humor may feel more punishing than funny for some, but an excellent cast and authentic sense of place make The Daytrippers a smooth ride.

The debut from writer/director Greg Mottola, The Daytrippers follows a Long Island family as they make a disastrous journey into New York City. The impetus is a love letter discovered by suburbanite Eliza (Hope Davis) which seemingly incriminates her publisher husband Louis (Stanley Tucci) in an extramarital affair. To solve the mystery, Eliza, her parents (Anne Meara and Pat McNamara), her oddball sister Jo (Parker Posey) and Jo's boyfriend Carl (Liev Schreiber) all pile into the family station wagon in a misbegotten attempt to track Louis down. Beginning as a playful, satiric look at family dynamics, The Daytrippers occasionally loses its way, becoming increasingly dark and venomous as it rushes towards the revelations of its final moments. For all of its flaws, however, it's often an engaging debut.

Stephanie Venditto
as Cassandra, the Receptionist

Ford Evanson
as Sandy
View All

News & Interviews for The Daytrippers

Squid and the Whale Star Signs on for Greg Mottola’s Superbad Follow-Up
The Weekly Ketchup: A Third "Starship Troopers," Jack Black Collaborates With Michel Gondry, Tension Between Fox And Marvel Over "X-Men," And More!
"Virgin" Team Gets "Super Bad"

View All The Daytrippers News

Critic Reviews for The Daytrippers

Thanks to the superb cast and Mottola's deft touch, this modest-looking comedy proves quite memorable.

A spirited cast, including old pros Amma Meara and younger talent Parker Posey and Stanley Tucci, elevates this claustrophobic sitcom (most of whiche is set in a car) into something fluffier and funnier than it actually is.

I do not mean to criticize Meara herself. She is, almost by definition, superb at her assignment here, which is to create an insufferable mother. The film's problem is that she does it so well.

The climactic twist is not only obvious but also registers as a stunt, and the ending is far too abrupt. On the plus side, the performances are uniformly excellent.

A cautionary tale of sorts that also humorously pokes at the kookiness of family.

Unfortunately, to reveal that this funny family movie is bisexual actually will ruin the film for anyone who wants to see it.

Will open your eyes to the role of respect as a keystone to durable love.

After an hour and a quarter of dead pan humor that only works in fits and spurts, the film finally comes alive in the last ten minutes.

Audience Reviews for The Daytrippers

It was very, I don't know, sleepy? Weird, surreal stuff started happening in the middle of these long pauses of nothing. And I spent the entire half of the movie thinking Parker Posey's character had some kind of a mental defect, which I don't think was how she was meant to be interpreted.