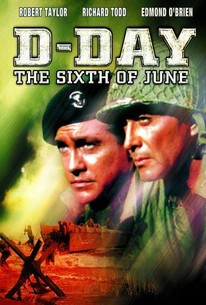 D-Day: The Sixth of June Photos

We don't see much of Omaha Beach in D-Day, the Sixth of June. Instead, the film concentrates on a romantic triangle involving American officer Robert Taylor, British officer Richard Todd and the lovely Dana Wynter. Taylor and Todd spend the last hours before D-Day reminiscing about Wynter. The romantic dilemma is eventually solved shortly after the invasion, when one of the men conveniently steps on a land mine. Lionel Shapiro's novel was geared more for the beach-and-bonbons crowd than war buffs, and the film follows suit. 20th Century-Fox gives a far more thorough account of D-Day itself in 1963's The Longest Day.

Conrad Feia
as Lieutenant at Party

June Mitchell
as Waitress
View All

Critic Reviews for D-Day: The Sixth of June

D-Day: The Sixth of June is a sappy old love-story wrapped up as a macho guy flick, and the movie barely works as either.

Audience Reviews for D-Day: The Sixth of June

Cardboard melodramatics form the backdrop for this war flick that only loosely focuses on the name event. Dana Wynter is fine as is Jerry Paris in a small role, Todd is more an afterthought than a character. Taylor is stiff as usual and O'Brien consumes the scenery and plows over any actor in his way. Forgettable.

This is not the typical War story like most that came out after the BIG ONE WWII. Very little war scenes or fighting in this one. My guess it was made for women who were getting tired of going to see bang bang shoot'em up movies. Its more of a romance story. Robert Taylor who is married falls in love with a women while in station in England, Her fiancée is fighting the war in Africa. So he's a player and so is she. I am sure this upset a few households in America when it came out. In the end Robert is sent to be involved in the landing of D-Day where our ladies fiancée saves Robert Taylor and puts him on a wounded solders ship and sends him back to England, he then turns around and is blown to bits by a land mine. Still its a good classic film. Worth 3 1/2 Stars.

D-Day: The Sixth of June Quotes