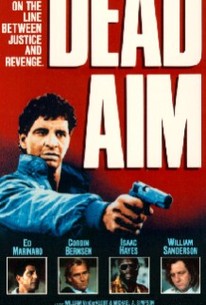 A New York cop takes on drug-smuggling Soviet agents in this action-espionage thriller. The trouble starts when the rebellious agents disobey orders and begin glutting the Big Apple black market with illegal drugs. The cops become alerted to the problem after four topless dancers die of heroin overdoses. Renegade detective Mace Douglas, who has just been demoted for his tendency to kill suspects and now finds himself teemed up with a smarmy college-educated, irritatingly straight arrow, sets about solving the case.

Jerry Silva
as Customer #4
View All

There are no critic reviews yet for Dead Aim. Keep checking Rotten Tomatoes for updates!

There are no featured reviews for Dead Aim at this time.