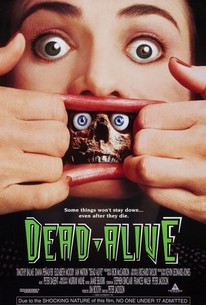 Critics Consensus: The delightfully gonzo tale of a lovestruck teen and his zombified mother, Dead Alive is extremely gory and exceedingly good fun, thanks to Peter Jackson's affection for the tastelessly sublime.

Critics Consensus: The delightfully gonzo tale of a lovestruck teen and his zombified mother, Dead Alive is extremely gory and exceedingly good fun, thanks to Peter Jackson's affection for the tastelessly sublime.

Critic Consensus: The delightfully gonzo tale of a lovestruck teen and his zombified mother, Dead Alive is extremely gory and exceedingly good fun, thanks to Peter Jackson's affection for the tastelessly sublime.

Considered by many to be the goriest film ever made and one of the funniest "splatstick" horror films since Sam Raimi's Evil Dead 2 (1986), Peter Jackson's New Zealand-lensed zombie epic Dead Alive is a hilariously over-the-top splatterfest that outdoes even the director's aptly-titled Bad Taste (which featured such gag-inducing sights as communal vomit-eating, exploding sheep and a chainsaw C-section). The story centers on a milquetoast mama's boy (Timothy Balme) whose budding romance with the lovely Paquita (Diana Penalver) is severely tested by the rapid decomposition and increasingly gross behavior of his oppressive mother (Elizabeth Moody), whose recent encounter with a "Sumatran Rat Monkey" transforms her into a rabid, flesh-eating zombie. Unable to bring himself to chop his undead mum into little pieces, he tries vainly (and disgustingly) to keep her alive until she begins chowing down on everyone within reach -- but even a dutiful son's love has its limitations. Concentrating his efforts on imprisoning her and the growing legions of her undead victims in the cellar -- away from both the nervous Paquita and the prying eyes of a greedy uncle (Ian Watkin) who has his sights on the old lady's inheritance -- he finally begins to realize that the whole affair is going to end very, very badly. Jackson's hyperkinetic directing style and the laugh-a-minute script lend a jovial, throw-away feel to the literal avalanche of sticky gore (the lawnmower climax must have set some kind of record for sheer blood volume) and severed limbs & organs splashing across the screen (there's even a fine bit of acting from a constantly-flatulent pile of intestines) with such gleeful abandon that it all becomes one enormous, tasteless joke. Although it certainly limits the range of its audience appeal (i.e. anyone who laughed out loud at the "Mr. Creosote" skit in Monty Python's The Meaning of Life will be delighted), Dead Alive is great fun for horror buffs with a well-disciplined gag reflex. Believe it or not, Jackson followed this film with the elegant, tragic art-house hit Heavenly Creatures (1992).

Fran Walsh
as Mother at Park

Jamie Selkirk
as Father at Zoo

Brian Sergent
as Vet
View All

[O]nce Lionel stops trying to cover up the zombie threat and starts fighting it, Dead Alive becomes a delirious showcase for molds, squibs, and other old-fashioned horror effects.

After you see it, you want to race out of the theater and recommend it to your sickest friends right away.

Ordinarily I don't care for this kind of thing at all, but something must be said for Jackson's endless reserves of giddy energy, which are clearly meant to be silly.

The best to date from Kiwi gore specialist Peter Jackson.

The finale, in which Lionel reduces a horde of flesh-eaters to a mulch of blood, flesh and offal with the aid of a flymo, is probably the goriest scene ever.

Dead Alive is a grisly but absurd romp that you definitely shouldn't watch while eating dinner.

Sensational grotesqueries lend to an intricately orchestrated, wondrously choreographed bloodbath that is one of the funniest - and most fun - of all horror flicks.

I feel like Dead Alive is telling the definitive anti-co-dependency tale.

The film was capable enough to treat the zombie genre with humor as well as respect. [Full Review in Spanish]

Whether you're laughing too hard or whether you're just plain disgusted, Dead Alive will have you doubled over in one way or another.

If only somebody had the insight, the verve, to create a zombie soap opera ... something like: My Ma Is A Zombie!!!, only make it so over-the-top that nobody would take it seriously. Yeah. The only thing that'd stir it up even more would be to give everyone Aussie accents, that'd be my thinking ... only I'd be too late. Peter Jackson has already made that movie, and this is it, the gory-est gorefest going on the planet. Think front row at a Gallagher show, and then multiply that by 20, no, 50. You're gonna need to be in the mood for this, that's my thinking. Say 13 or 14 years old.

Who would have thought that Peter "Lord of the Rings" Jackson started his career off by making campy, gory horror schlock films like this? This film, despite the copious and over the top amounts of blood and gore, is actually quite hilarious and enjoyable. The plot follows a village dweeb who tries to have a budding romance, while also trying to conceal the fact that his overbearing mother is a flesh-eating zombie. The tone of the film is deliriously cartoonish and over the top.I think that's what makes it surprising considering that it's also probably the goriest film I've ever seen, if not the goriest of all time. Seriously. I can't believe how gruesome and messy this film gets, and I actually feel even more twisted for finding it all so friggin' amusing. The effects are very well done, and really make you appreciate the effort that goes into this sort of thing. The acting is also surprisingly really good, and there's some good lines, too.

Think Greg Kihn's "Our Love's In Jeopardy" video @ 200 mph. Fuck I dated myself.