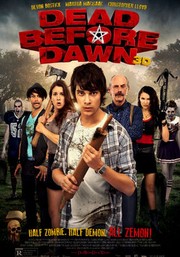 D M
March 5, 2017
A group of college students enter a witchcraft store, inadvertently breaking an item. They mock the idea of a curse, invoking a number of horror tropes. In doing so, they unleash zemons (zombie-demons) and several other terrors. A very funny film starring Kevin McDonald and Christopher Lloyd.

Matthew B
July 1, 2015
Awful has expected. The only reason I saw it is because I thought it will be funny like most films like this, but I didn't even laugh or have a good time. Stuff this movie.

Casper Galloway had a horrible accident happen to him in his grandfather's shop while he was a kid. He never enjoys trips back to the shop. One unfortunate day, his grandfather asks him to work in the shop so he can go on vacation. He reluctantly works at the shop. His friends visit him, break a cursed skull, and unleash a curse. The kids will have to work together to reverse the curse by dawn or everyone they ever look at will turn into zombies.

April Mullen, director of 88; Gravy Train, and Rock, Paper, Scissors: The Way of the Tosser, delivers Dead Before Dawn. The storyline for this picture is a zombie parody movie with a mixture of kill sequences and comedy. The writing was kind of bland and the comedic content was bad. The cast delivers mediocre performances and includes Christopher Lloyd, Devon Bostic, April Mullen, Brittany Allen, and Kevin McDonald.

"So I grabbed the bitch's titties and threw her as far as I could."

Dead before Dawn was a new movie added to Netflix that I thought looked interesting and added to the queue. This was a campy movie with below average comedic content and acting and the special effects were just okay. Overall, this is a disappointing film that really isn't worth your time.

"Is that a pump action shotgun?"

Tyler A
October 20, 2014
cheesey but better then dentention of the dead

Wes S
½ September 3, 2014
Not completely solid, but it's still a lot of fun. The characters are interesting enough, and the zemons are pretty well done. The humor isn't too off and the pacing is fairly decent. The ending is a bit of a cheat yet refreshing.

Daniel E
½ August 22, 2014
Had some funny moments but lacked anything appealing.

Super Reviewer
Jesse O
½ August 18, 2014
I don't expect this to be a very long review. Not exactly sure whether to give this film 2.5 or 3 stars. Either way, regardless of the rating I give the film, I still had quite a bit of fun with this movie. It's got a fun cast that was clearly having a blast and some pretty clever moments. But, personally, I think the cast did a great job at elevating the material because I can imagine not being impressed if I had read the script. And the story is actually pretty tragic, for the most part at least until the end which is one of those deus ex machina-type endings that kinda works here but wouldn't work in any other movie. Casper loses everybody in his life, his father as a child and then his mother, grandfather, best friends all after the curse begins. The movie rectifies all of that by, MASSIVE SPOILER, pressing rewind on everything, that happened and taking everybody back to Casper's grandpa's occult shop where everything originated. Literally, they press rewind and you get to see past scenes. It's a little bit too perfect for my tastes, there wasn't any real consequence to any of their actions in setting off this curse, but this movie was meant to be silly and fun so I get that it didn't want to have a serious ending where the curse is over but everyone is dead and Casper would have to live with the guilt for the rest of his life. It wasn't that type of movie, so I get it. It still didn't really do much for me, hence why I probably gave the film 2.5 stars. Combined with the fact that I think the film could've been shorter, there were some stretches there that could've definitely been cut out. Because of that, the film gets the rating it did, but I still think the film fulfills its purpose of entertaining you. I definitely had fun watching this movie, even if I didn't think it was perfect. This is a good choice if you want something easy and fun to get through. It's not gonna set the world on fire, nor is it gonna make you a horror fan if you aren't one already, but it is a fun little movie for about 85 minutes and that's all that it wanted to be.

Aaron B
July 30, 2014
There is plenty of cheesy horror fun to be had with Dead Before Dawn, that is, if you can overlook its low budget restraints and occasional poor acting.

Fabio P
½ July 3, 2014
Nice idea, but terrible production. The only fun scenes are those you see in the trailer, most of the acting is mediocre and the plot is ridiculously poor. Nice make-up though.

Fabio P
½ July 3, 2014
Nice idea, but terrible production. The only fun scenes are those you see in the trailer, most of the acting is mediocre and the plot is ridiculously poor. Nice make-up though.

Katie N
April 26, 2014
It was cute! Better than all the scary movies except scary movie 3 that ones the best of course.

Ed C
April 17, 2014
One line summary: A film about rapid zombies without much humor or plot.

Casper has a traumatic experience as a child at his grandfather's curio shop. He still has nightmares during college. A particular vessel drops, his father catches it, and his father is transformed for the worse by it.

The lights go out. The group makes up a curse, in great detail, then say they are done with the curse's rules. The lights come back on. The group agree to meet later to test it out.

So, if someone in the group looks directly into someone else's eyes after 10 pm, the targets kills themselves, then return as a mixture of demon and zombie, or zemon. Unless they reverse the curse before dawn, the group itself will be cursed.

That evening, the number of mysterious deaths mount, but many of the 'dead' do not stay dead. The group re-assembles, realises that they are in deep trouble, then arm themselves. They go back to the Occult Barn, and tell Horus about the incident and the curse. Unfortunately, they look Horus in the eyes, and he kills himself.

Will the group be able to use Horus' book to reverse the curse? Will anybody in town be left as a normal human?

Cinematography: 5/10 Better than VHS quality, but not by much. The SFX vary from mediocre to poor.

Sound: 6/10 I could hear the actors' voices and the incidental music, some of which was appropriate for a zombie comedy.

Screenplay: 2/10 Boring, not funny, not engaging. The central idea of the curse was beyond stupid.
Page 1 of 3