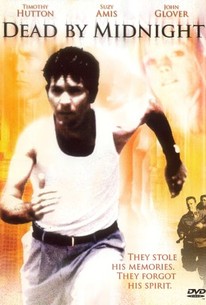 John Larkin (Timothy Hutton would seem to have the ideal life: A great job, a beautiful home, a happy marriage. Nonetheless, John has always been nagged by the feeling that "something is missing." The truth of this suspicion is violently driven home when John is inexplicably kidnapped from his home in the middle of the night by two sinister strangers. Managing to escape, John makes his way back to his wife (Suzy Amis--only to find out that she's not his wife at all, but instead a doctor for a top-secret government agency. Laboriously putting the pieces together, John realizes that he has never truly existed as a human being since he was nearly killed in a car crash: Instead, he is a semi-android, his brain implanted with false and misleading memories--all part of a master scheme to transform him into a "perfect" government assassin! Not dissimilar to such theatrical technothrillers as Total Recall, the made-for-TV Dead By Midnight (you'll have to see the film to understand the title's grim significance) was first aired by ABC on November 23, 1997.

Dennis Saylor
as Billy
View All

Critic Reviews for Dead by Midnight

Some juicy ideas, but the sci-fi story never comes together as a cohesive movie.

Audience Reviews for Dead by Midnight

Another Suzy Amis Film, Out of the 23 she has appeared in I've seen the 17 that are available in DVD. This one is not her best but also not her worst. She plays the part of a government agent, and helps a robot/man to regain his true identity. Timothy Hulton plays a great part and reminds me to much of Tom Hanks. There is little action and little in the way of thriller, but its not a bad movie, just give it time, let first 30 minutes past before you shut down the boob tube. I'd say rent it, or find it in the bargain bind. 3 1/2 stars is all it gets.