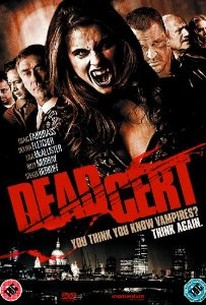 British mobsters meet the undead in this grisly, gory opus from director-producer Steve Lawson. The action starts when Freddie Frankham (Craig Fairbrass) asserts his presence in the East End criminal underworld by founding and running a nightclub. Unfortunately, he makes the mistake of building the club on the land of Dante Livienko (Billy Murray), a bloodthirsty vampire known as 'The Wolf.' Dante wants control of the establishment, and soon engages Freddie in a battle from which only one will emerge unscathed. ~ Nathan Southern, Rovi

The film's bloody conflict between 'honourable' oldschool diamond geezers and new sleazy 'foreign' entrepreneurs brings with it an overstated allegory (on the City's increasingly globalised economy) that reeks of ugly xenophobia.

It's a cross between lock stock and from dusk till dawn but its not that great.Its a ok movie but is let down by some bad acting and poor set pieces.The sfx is good but not great and there is no exploding vampires when they get steaked i don't think the budget could reach that far.The main saving grace it that its all tongue n cheek but that get a bit tiresome by the end.

Cool independant vampire horror. An ex-con is trying to make an honest go of things by opening a club in London but things go tits up when a Romanian businessman wants to buy the land by any means possible. The ex-con refuses but when a close friend gets killed by one of the businessmans clan a battle ensues but the bad guys turn out to be vampires making things alot harder than usual! Although not brilliant, this is pretty well written and acted with gangster film veterans Craig Fairbrass, Billy Murray, Dexter Flethcher and British theatre legend Steven Berkoff all putting in good performances. Worth a look if your an old school vampire fan.