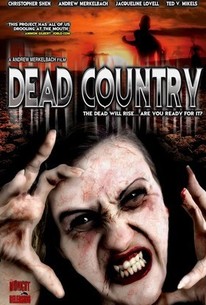 Cult cinema icon Ted V. Michaels co-stars in this rural-set zombie flick concerning an alien plague that transforms regular people into undead ghouls, and the desperate survivors who team with a benevolent alien to save the human race. An alien ship containing hazardous material has exploded over a small town, unleashing a deadly virus on the unsuspecting citizens. Now, everyone who got contaminated is suddenly craving human flesh. Perhaps with a little help from an alien who knows how to stop the plague from contaminating the entire planet, the few remaining survivors can prevent humanity from collapsing into a cannibalistic nightmare. But they'll need to collect their wits in order to be successful, and with zombies closing in from all sides, it's impossible to think of anything other than saving their own hides. ~ Jason Buchanan, Rovi

There are no critic reviews yet for Dead Country. Keep checking Rotten Tomatoes for updates!

There are no featured reviews for Dead Country at this time.