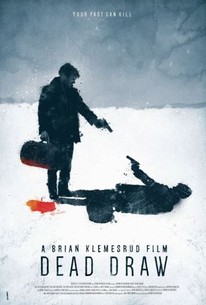 25 million dollars, 8 safety deposit boxes, and months before anyone will know it's gone. But Harrison's (Gil Bellows) perfect heist turns deadly when his safe-cracker, Mack (Michael Eklund), discovers their getaway pilot brutally murdered. Someone knew about the job, someone set them up. Stranded in a frozen hangar, held hostage by someone outside, loyalty turns to suspicion and friends turn to enemies. Now it's a race against time as the band of thieves try to uncover the rat and escape their troubled pasts... if they can survive the night. A dark and intricately structured genre film, Dead Draw is a story where every motive is questioned, every moment is critical, and every secret could prove fatal.

Josh Odor
as The Drunk

Paul Haddad
as Bartlett
View All

There are no critic reviews yet for Dead Draw. Keep checking Rotten Tomatoes for updates!

There are no featured audience reviews yet. Click the link below to see what others say about Dead Draw!