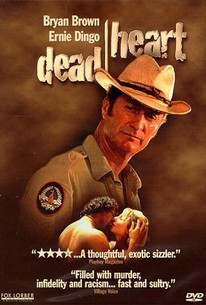 Though not quite a western, this gripping Australian drama contains similar themes as it chronicles the unending struggle between native aborigines and ever-encroaching Europeans. Set in the arid red-rock desert west of Alice Springs, a region called Dead Heart by the whites and hailed as a sacred place by the aborigines, the story centers on the travails of Ray Lorkin (Bryan Brown) the local lawman who sees that Australian laws are obeyed in the tiny village of Wala Wala where he is one of only seven whites. The story itself unfolds via flashback as told by the Aboriginal village elder Poppy. The trouble begins in the town jail when an Aboriginal prisoner is discovered dead. Believing the hanging to be murder, the town tribesmen demand revenge. Lorkin, while not fully understanding aboriginal customs, has always tried to remain tolerant and respectful of their ways and so allows his deputy, Billy, to be ritually wounded during a ceremony of vengeance. More trouble brews when Aborigine bootlegger Ray Tony takes the schoolteacher's bored wife Kay out to a particularly sacred area for an illicit tryst. Later, Kate finds Tony dead. Strangely, his body shows no signs of violence. Despite the lacking evidence, Lorkin suspects a murder and demands justice. His investigation leads him down a dangerous, winding path that culminates in a tense and surprising manner. ~ Sandra Brennan, Rovi

Peter Francis
as Mannga
View All