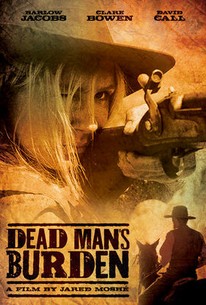 Set in 1870 in the immediate aftermath of the Civil War, DEAD MAN'S BURDEN is the story of Martha (Clare Bowen, ABC's Nashville) and her husband Heck (David Call, Tiny Furniture), who are struggling to make ends meet on the rural New Mexico frontier. When a mining company expresses interest in buying their land, Martha and Heck see their ticket to a better life. Their hopeful plans are soon complicated when Martha's oldest brother Wade (Barlow Jacobs, Shotgun Stories), presumed dead during the war, returns to the family homestead after learning of their father's death. A defector to the Union Army, Wade soon discovers that Martha is hiding secrets of her own. As the two siblings become reacquainted, torn between a desire to reconcile with the only family they have left and their clashing convictions, tension and suspicion continue to mount. Filmed on location in the rugged high desert of northern New Mexico, DEAD MAN'S BURDEN, shot in the style of a classic western, marks Jared Moshé's directorial debut. (c) CineDigm

It's a strong debut for Moshe, who, with the exception of some of the oater dialogue, shows both a reverence for and a knowledge of the genre that's intriguing.

Ponderous but lovely, simple but elegant, it should appeal to fans of Westerns.

Small in scale but with a grand visual ambition, "Dead Man's Burden" draws nourishment from its burned-out desert setting and ambling pace.

Despite visual nods to dozens of classic Westerns, the film cannot break through with its own vision.

The story is modest to the point of occasionally seeming slight, and the ending is a tad too cute in the way it circles back to the beginning, but even those flaws just make it feel more authentic. See it now, before it gets rediscovered.

It's always a pleasure to encounter genre ambition contained in such a sinewy-shot, emotionally resonant, and gorgeously photographed package.

There's nothing like some good old fashioned gunfire, family squabbles, horse riding, spurs, miners and homesteaders to get the juices flowing and that's just what first time feature writer/director Jared Moshe does.

While it doesn't reach the height of exuberance seen in many of the films it invokes, Dead Man's Burden is an intriguing effort.

The movie offers a convincing look at the sort of irreparable damage the Civil War did to families, but too often it feels like self-conscious role-play.

Dead Man's Burden isn't [great], but it's not a bad horse opera and is unflinching in its depictions of harshness and violence.

Oddly lifeless, despite the clearly devoted efforts of the cast and crew: It's admirable without being particularly engaging, so respectful of its cinematic predecessors that its own voice is strangled.

In "Dead Man's Burden," Wade McCurry(Barlow Jacobs) has survived the Civil War only to find that he is not entirely done with violence just yet. And then once he gets to his family homestead in Texas, he has to prove to his younger sister Martha(Clare Bowen) and her husband Heck(David Call) that he is who he says he is and that his death was greatly exaggerated. That's only to discover that he is too late to attend his father's funeral. "Dead Man's Burden" is a great looking western that has some deep thoughts on the nature of frontier justice. But as far as any kind of story or characterization goes, the movie is sadly paper thin, with acting on the amateurish level of historical reconstructions.