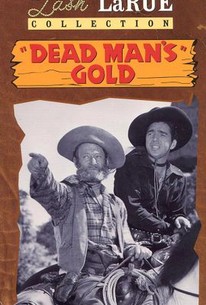 Yet another routine B-western featuring the black-garbed, whip-wielding Lash LaRue, a dead-ringer for a young Humphrey Bogart, and his sidekick Fuzzy (Al St. John, Dead Man's Gold was the first in a series of ten very inexpensive oaters produced by Ron Ormond for Western Adventure Prod.. Arriving at their friend Jim Thornton's ranch in Gold Valley, Lash and Fuzzy learn from Thornton's niece June (Peggy Stewart) that her father has gone missing for three days. Lash finds some gold nuggets and realizes that the land may be a valuable target for a gang of claim jumpers terrorizing the valley. As it turns out, Thornton has been murdered by the town's crooked mayor (Lane Bradford) and his own foreman (Terry Frost. Lash and Fuzzy "persuades" the latter to turn state's evidence and the crooked mayor is brought to justice.

Marshall Reed
as Man on Stagecoach

This typical cowboy battle of good versus evil holds no surprises.

There are no featured reviews for Dead Man's Gold at this time.