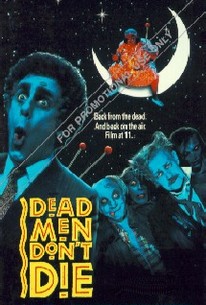 Television anchor Barry Barron (Elliott Gould) is killed after he becomes involved with a breaking story, but is raised as a zombie by a voodoo spell. Not quite the stumbling idiot that most of the undead are known for, Barron has to solve his own murder and uncover the story. He is helped in his quest by a spiritualist (Mabel King).

The awkward horror film is a toothless parody on TV news that is too childish to give it a second thought.

There are no featured reviews for Dead Men Don't Die at this time.