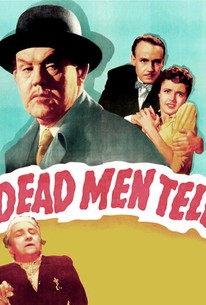 In this episode from the popular detective series, Chan looks into the death of a strange old woman who was murdered right before she embarked upon a schooner to search for a lost family treasure worth $60 million. Chan scares up the killer who frightened the old lady to death by dressing up as the woman's ancestor, a pirate.

It was entertaining to watch all the spookiness aboard the ship.

There are no featured audience reviews yet. Click the link below to see what others say about Dead Men Tell!