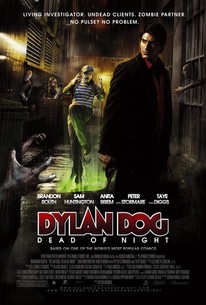 DYLAN DOG: DEAD OF NIGHT is a new horror/comedy film based on one of the world's most popular comics (60 million copies worldwide). Brandon Routh stars as Dylan Dog, world famous private investigator specializing in affairs of the undead. His PI business card reads "No Pulse? No Problem." Armed with an edgy wit and carrying an arsenal of silver and wood-tipped bullets, Dylan must track down a dangerous artifact before a war ensues between his werewolf, vampire and zombie clients living undercover in the monster infested backstreets of New Orleans. -- (C) Omni/Freestyle Releasing

Randal Reeder
as Bob the Mechanic

The film longs to be a hip skewering of noir and monster movies but instead is kneecapped by mediocre effects, indifferent performances and a generally dull design.

Even if the whole vampires vs. werewolves thing hadn't already been done to un-death by True Blood and the Twilight and Underworld franchises, Dylan Dog would still be a crushingly dull 107 minutes.

Director Munroe is clearly a fan and attempted his best on an admittedly limited budget, but some things just don't translate that well.

While he's fine playing bemused and beleaguered, Routh can't muster the edginess that Dylan is also meant to have. Diggs looks fabulous, but has his own problems with the dangerous stuff.

Brings vampires, werewolves, zombies, detective noir and spoofy comedy together for a murky genre gumbo with barely any flavor.

The plot is so bland and uninspired that all the gruesome practical effects in the world couldn't save it from monotony.

Quite nearly dead on arrival.

Dylan Dog: Dead of Night is agreeable and diverting -- it's just not especially distinctive.

It's entertaining enough, and the cast is great, but there's just not enough meat on the bones to really make it work as well as it should.

Dylan Dog: Dead Of Night is a fun comedy/horror whodunnit with a supernatural twist. It delivers plenty of movie fun too, just like those campy 80's monster flicks.

Amy Curtis
We Got This Covered

Fun performances from Routh and Huntington can't make up for an extremely convoluted and mostly soulless story -- even when there's a giant zombie running around.

OK well for starters we have seen this kind of thing now many many many times over, there is nothing new here and nothing that really impresses to be brutally honest. Despite that this is still a reasonably enjoyable monster and myth movie with a creative side that is clearly down to its solid comicbook origins. I don't know anything about the comicbook but its quite old (1986), so I can't say for sure but I do believe this comic may have given rise to other such characters and franchises like 'Hellboy', 'Underworld' and probably others. The problem is they have left this adaptation too long and missed the boat. This a real mix of many cool ideas and the first to spring to mind was 'Van Helsing'. DD is very much a monster mash with everything from vamps, werewolves, zombies, ghouls and demons. Add to this a neat little touch of black humour with zombie sub plots involving zombie support groups complete with flyers and a zombie bodyshop where the undead go to fix themselves up. Clever touches like that make this film fun to watch. Now the first 30 minutes of this film is dull I can't lie, I was getting bored as nothing was happening. The concept is clearly going for an old detective film with narration from Dylan as he investigates clues, its nice and gives the film a touch of class but ultimately its kinda dull too. Things start to spice up as creatures of the night come into play and the plot thickens, we discover a huge uber zombie is killing folk and there's a battle going on between certain humans and the undead ergo...a bit like 'Underworld'. The problem is the film does get more enjoyable but you just can't help but relate everything to many other films, some I've already mentioned. You feel as if you've seen this all before (which you kinda have) and you know what's gonna happen. The other problem is the effects aren't all that great on the werewolves, the vamps don't look anything new with their facial design (think 'Lost Boys' or 'From Dusk Till Dawn') and of course zombies will always look the same. There is a quite lovely piece of makeup/prosthetic work at the finale where baddie vamp leader Vargas transforms into a mega demon of some kind, looks absolutely fantastic but again it also looks identical to Darkness from 'Legend' or Marcus from 'Underworld 2' plus his appearance is a total anti-climax. In short the CGI work isn't the best and neither are the stunts truthfully, blood and gore is minimal which is fine but makeup is probably the winner over CGI here. The CGI is about on par with the first 'Underworld' flick which is obviously dated. There is a hell of a lot of imagination going on here which is terrific and as this character came about in 86 I'm sure he came before much of what we already know in terms of night creature mythology. Had this been made before a lot of well known films then I'm sure it would have received a much better reception and may well have be known as a semi cult classic like such films as 'Blade' and 'Underworld'. Its a shame as despite the large amount of monsters all fighting for screen time the film doesn't feel clustered and it is nicely done with good humour and a nice dark film noir detective angle. The zombie sub plots are easily the best for plus points in terms of originality (almost). If you try not to compare this film to others its good fun, with better CGI work I wouldn't mind a sequel as Routh as Dylan is a likeable character who isn't over the top and arrogant. I did enjoy the monster mash, shame they had to include the always cliched and now over used martial arts fighting weapon clad female lead. Have her as a hardass sure but lets not go down the boring Milla Jovovich route again please, no need for that in the sequel...if there is one.

I really really really wish that Munroe's unproduced animated film Cat Tale was released instead of this. Crap that's absolutely trashy. I hated this movie. Cat Tale would definetely better than this. Even if its bad.