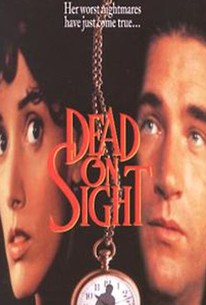 In this thriller, Rebecca Darcy (Jennifer Beals) is being haunted by a recurring dream in which a violent psychopath brutally murders a number of people. Rebecca has psychic abilities, and in the past she has dreamed about events that soon became reality, so with no small concern, she goes to the police with her story. The authorities refer Rebecca to Caleb Odell (Daniel Baldwin), a college professor who does research on the behavior of serial killers -- and whose wife died in an incident quite similar to what Rebecca saw in her dreams. Soon Rebecca and Caleb have joined forces as she hopes to prevent a murder, and he hopes to find the man who killed his wife. Dead on Sight also stars William H. Macy, Kurtwood Smith, and Kent Williams.

Critic Reviews for Dead On Sight

There are no critic reviews yet for Dead On Sight. Keep checking Rotten Tomatoes for updates!

There are no featured reviews for Dead On Sight at this time.