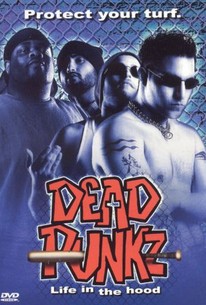 A young man looks outside the law with disastrous results in this hard-hitting drama about a teenager trying to escape life in the ghetto. Samson (Steve Liberman) has had a woefully inadequate childhood growing up in a crime-ridden inner-city neighborhood. While he's bright, he's also short-sighted and thinks petty crime is an easy route out of the ghetto. Samson ends up behind bars after taking part in a drive-by shooting, but he escapes with a group of friends, only to fall under the sway of a drug dealer who offers him protection in exchange for running crack cocaine. But when a delivery goes haywire, and he loses 100,000 dollars worth of drugs, his protector becomes his arch-enemy, and Samson has nowhere left to turn. Dead Punkz also stars David Winston and Francine Lapensee.

Christine Kaye
as Mother
View All

There are no critic reviews yet for Dead Punkz. Keep checking Rotten Tomatoes for updates!

There are no featured reviews for Dead Punkz at this time.