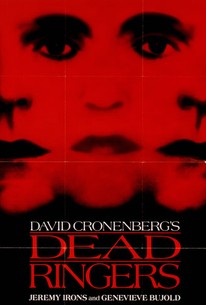 Based extremely loosely on a true story, Dead Ringers stars Jeremy Irons and Jeremy Irons. You read right--Irons essays the dual role of identical twin doctors, who frequently sub for each another professionally. The twins also capriciously share one another's lovers, priding themselves on that fact that their subterfurge has never been detected. Enter Genevieve Bujold, playing a popular actress. Courted by both twins, Genevieve selects the shyer of the two. The more aggressive sibling takes offense, setting the stage for the ruination of the brothers' relationship and careers. The split-screen and travelling-matte work in Dead Ringers is well nigh undetectable, but the film's "highlight" is a rather gruesome dream sequence involving severed skin (a favorite device of director David Cronenberg).

Lynne Cormack
as Arlene
View All

People like myself who find the character played by [Genevieve] Bujold (in one of her best performances) more interesting than either of the twins are bound to feel rather frustrated by the end.

An intense psychological drama which confronts [Cronenberg's] familiar preoccupations -- fear of physical and mental disintegration, mortality, the power struggle between the sexes -- without the paradoxical protection of visceral disgust.

Cronenberg, who has begun to emerge as a master of body-related horrific fantasy, clearly understands that a small amount of medical mischief can be more unnerving than conventional grisliness.

The kind of movie where you ask people how they liked it, and they say, 'Well, it was well made,' and then they wince.

"Dead Ringers" is by no means a date movie. This is one effed up little horror flick.

[Irons'] performance no doubt exhausted the actor more than it impresses the audience.

Irons' performance as the tormented twins is a tour de force. So is Cronenberg's complex camera work.

Dead Ringers may be a beautifully structured and well-acted movie, but it certainly's isn't an easy film to watch. Still, if you like horror movies, this one will keep you on the edge of your seat, albeit squirming every minute.

The film is always compelling and Jeremy Irons does a great job playing two identical characters who are just a tiny bit slightly different, but it becomes hard to care when we see how contrived everything is in a script that wants them to go nuts for some artificial, lame reason.

Brilliantly offbeat and twisted. Irons' performance is a must-see.

A woman disturbs the delicate psychic balance between twin gynecologists. Genuinely unnerving psychodrama with a dominating performance by Jeremy Irons.

As come to be expected, this is another strange tale from David Cronenberg. Featuring brilliant performances from Jeremy Irons and Jeremy Irons).