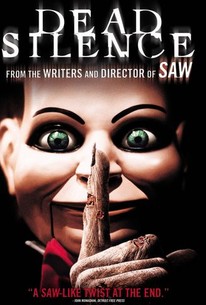 There is an old ghost story in the sleepy town of Ravens Fair about Mary Shaw, a ventriloquist who went mad. Accused of the murder of a young boy, she was hunted down by vengeful townspeople who cut out her tongue and killed her. They buried her along with her "children," a hand-made collection of vaudeville dolls. Since that time, Ravens Fair has been plagued by death. The ghastly dolls from Mary Shaw's collection have gone missing from the grave and reappeared over the decades. In the dead of night--wherever they are glimpsed--families are found gruesomely murdered with their tongues torn out. Far from the pall of their hometown, newlyweds Jamie and Lisa Ashen thought they had established a fresh start. But when his wife is grotesquely killed, Jamie reluctantly returns to Ravens Fair for the funeral, intent on unraveling the mystery of her death.

Wan and Whannell have a carnivalesque sense of fun and a sure instinct for recycling classic horror tropes, but their characters are so flat and their plotting so listless that this low-budget feature fails to generate much suspense.

For the love of Chucky, avoid this insipid attempt at reviving the killer doll horror.

There's something quaintly charming about the filmmakers' unabashed affection for their inspirational source material, although the sense of over-familiarity means that none of it is in the least bit scary.

It's woefully flat and not nearly as scary as it thinks it is. It almost makes one yearn for Saw. But not quite.

I admit that I didn't see the daft last-minute twist coming, and sort of admired it, but for the rest you'd need an extravagant love of hokum not to feel mildly bored.

there's something about its overblown stormy-night atmospherics and reliably dismal dialogue that's bad in almost a fun way. I'd rather laugh through this kind of harmless, rickety schlock, any day, than grimace through Saw III.

Dead Silence is a solid horror film and a look into the early works of James Wan and Leigh Whannell. And while it might have become a bit dated along the way, it is still a brilliant horror film to terrify.

Dead Silence has a lot of good qualities (the production design, the menagerie of creepy dolls, great makeup effects when folks lose their tongues/jaws), but overall this film has a huge debilitating weakness: it is dull as f***

Mediocre and illogical retro horror pic about a malevolent dummy.

If you're in the mood for a Saturday afternoon-ish throwback thriller, you could certainly do a hell of a lot worse than this one.

A very creepy little ditty that works once it rears up to the second half.

A Nightmare on Dummy St. from Saw creators.

A creepy horror movie that builds an ominous atmosphere with an ambitious production design and great eerie cinematography (of course, James Wan), and even if the efficient story is nothing really special or original, it offers a nice twist in the end.

I kinda liked it...though I'm probably in the minority. I'm terrified of puppets/dolls coming alive, so this movie freaked me out. I've watched so many horror films and I'm not phased by anything...except puppets/dolls. Ever since I was a kid, I thought they were just so fucking creepy. So this movie definitely scared me more than most of the horror films I've watched. I thought it was pretty decent. And damnnn Ryan Kwanten...every time his gorgeous Australian accent slipped through....I loved it. The characters were fairly underdeveloped, and it was kind of predictable, but whatever. It was a pretty good B-movie. The pacing seemed a little fast for my taste, maybe that's why the characters weren't developed as well. But other than that, I can't complain. The twist at the end was cool. I'd watch it again.

There are two things in this world that creeps the hell out of me: the first being clowns and the second being evil puppets. Terrifyingly enough, this movie has both! Now, I'll be honest here and say that I didn't expect much out of this film. In fact, I was but a word of discouragement away from skipping it altogether. But I'm very pleased that I didn't, because this was so much better than I first gave it credit for. In similiarity to Insidious, it's a very atmospheric production, with spooky, nightmarish settings, enveloped in mist and spine-tingling tension. Although the characters are one-dimensional and pretty brainless in their actions, there's a lot to love about the movie in terms of scare factors and excitement. All-around, the directing is superb, and it feels like one of those old-school horror movies that I used to watch as a kid. Surely not to everyone's taste, but if you like Kwan's other films, then you'll probably enjoy this one as well. And did I mention how seriously creepy it is?

A creepy horror film with a high production value and good cast. There might not be a high enough body count for some, or for it to be classed as a slasher anyway. However it does have a spooky atmasphere with the creepy dolls. Not the most original or scary film, but at least it tried something new and different, among the endless carbon copy horrors being released these days. I have to add for a horror film the photography is great, you really can tell the attention to detail in every shot, from the angle, framing, lighting and colours. You don't notice that in many horror films!