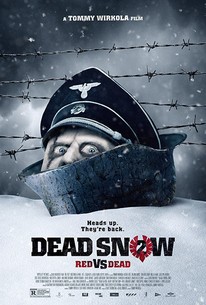 Critics Consensus: Dead Snow 2: Red vs. Dead expands the original's canvas without sacrificing any of its bloody fun, adding up to a sequel that fans of the first are bound to enjoy.

Critics Consensus: Dead Snow 2: Red vs. Dead expands the original's canvas without sacrificing any of its bloody fun, adding up to a sequel that fans of the first are bound to enjoy.

Critic Consensus: Dead Snow 2: Red vs. Dead expands the original's canvas without sacrificing any of its bloody fun, adding up to a sequel that fans of the first are bound to enjoy.

Martin (Vegar Hoel) hasn't had the best vacation. He accidentally killed his girlfriend with an axe. He cut his own arm off with a chainsaw. And his friends STILL got devoured by a battalion of Nazi Zombies. This morning, he woke up in a hospital bed with a new arm - but it's a super-powered Zombie arm that wants to kill him, and anyone else it can reach. Martin's PISSED. And with the help of his new Zombie Squad pals (Martin Starr, Jocelyn DeBoer, Ingrid Haas), he's gonna deliver some payback to Colonel Herzog and his precious Nazi gold - by raising an undead army of his own. (C) Well Go

Now Streaming: The Theory of Everything, Beyond the Lights, and More
Critics Consensus: Alexander and the Terrible, Horrible, No Good, Very Bad Day Is Okay

If you're willing to go along for this farcical ride, you'll find 'Dead Snow 2' to be one terrific zombie movie.

As bad-taste splatter comedies go, "Dead Snow 2" is one of the more charitably nutty ones, less about gorging on gore than reveling in how silly the whole genre can be.

The makers of "Dead Snow 2" rely heavily on the inherent absurdity of their film's premise, and expect you to do the rest.

If the movie's hilariously cruel treatment of the halt and the lame upsets you, you can enjoy the crisp cinematography, operatically repulsive effects and frequently witty dialogue.

Dead Snow 2 has its share of fun, goofy, gory moments...Half the budget must have gone for fake intestines.

Suffering from a rampage of defiant narrative mistakes often administered in unnecessary sequels, this rehash is laconic, unenthusiastic and inherently routine.

Where the first movie was limited by its small cast and budget, the second sees literal armies of zombies brutalising each other as fistfights occur on moving tanks.

What comes next is much more unpredictable, but the laughs and gore are consistent and so freaking fun.

Dead Snow 2 is certainly not a perfect film, but it ultimately manages to equal the fun factor of its predecessor - which is by no means an easy task.

Dead Snow 2: Red vs Dead is a film that wants to make you like it, but succeeds only in making you wish you liked it more.

A big batch of energetic silliness made for people who love zombie movies, but don't mind a little comedy mixed in once in a while. OK, a lot of comedy.

Look, I understand this film's reason for, instead of the dialogue being in Norwegian, it's in full English. This, and the integration of American actors, probably made it easier for this film to find distribution on this side of the world, which is strange considering that the original film was already kind of a cult hit here. Make it easier to get the budget necessary to tell the story that they wanted to tell. So, in spite of some of these attempts to appease a different audience than the first film, which some might look down upon, this movie is vastly superior in almost every way to the first film. This may actually be one of the best horror sequels in years, maybe ever. And I realize that may not actually be saying a lot considering that horror sequels, almost as a general rule, have always been pretty bad. There's a couple of exceptions, with the most obvious one being Evil Dead 2, which the first Dead Snow was somewhat inspired by, and maybe the first Rec sequel. But in the case of Rec 2, it was still a step down from the incredible first film, it didn't improve on what came before it on almost ANY level. This film does, so therefore, to me, it is probably one of the best horror sequels in recent memory. The film just looks much better as a whole, you can notice the difference from one film to the other. You can see that the first one was a smaller budget, a small team, and this one is clearly considerably bigger and covers far more ground than the first Dead Snow. Another thing is the fact that this sequel feels like it has its own identity far more than the first one. While I certainly had fun watching Dead Snow, it honestly felt like a movie I had seen several times before. There was nothing really refreshing about it. It had enthusiasm and it had energy, but it was still something that I felt I had seen before. This one, on the other hand, clearly sees Tommy Wirkola, director and writer of the film, coming into his own as a horror filmmaker with a very clever and witty writing style. While Dead Snow 2 still definitely deals in camp, but I think the dialogue has taken a significant step up from the first film. There's some very witty lines here and some ridiculous, yet hilarious, moments in this film. This is an openly funny film as opposed to the first one, where it was meant to be campy as opposed to a full-out horror-comedy. The film is very well-cast with very likable and funny characters like the Gunga, the lieutenant who has a thing for seagulls, not in that way, just in general a lot of the conversations he has ends up referencing seagulls in one way or another. Gunga most definitely steals the show here, but that's nothing when you take into consideration that every character in the film has a little something that they bring to the table in terms of entertainment. It's just that Gunga has some of the crazier moments and lines in the film. The only thing I didn't really like were the forced Star Wars references by Monica. I think her and Blake, the other female character in the film, are definitely welcome additions to the series, as both as very funny, but this part of the character did nothing for me. It just felt like the requisite geek character and Star Wars is easy geek fodder. It's probably the only thing about the script/movie that I really didn't like. Some of it works, but it misses the mark, massively, in others. That's honestly my only complaint because when you get right down to it, Dead Snow 2 is an absolute blast from beginning to end. It's not like the first film, where you had to wait until the last act, where shit got really crazy. This one is a blast from beginning to end. There's no waiting period before it gets awesome. This is the type of film that I could see myself watching at least once every year. I won't do it, but I can see myself doing it. And that's not something I could say about many movies, and this includes non-horror films. If you loved the first film, then there's absolutely no reason you wouldn't like this. And even if you didn't watch the first film, it's done in such a way where you don't need to watch it in order to enjoy it. I may not have given it 4 stars, but this is a great horror movie. Highly recommended.

Not as 'good' as the first film, this sequel significantly ups the gore quotient and injects a whole lot more juvenile humour.

Beyond expectation. I can see a franchise coming along. The sequel picks up from where the first film left, Martin now became accused of the murder of his friends, no one would believe his Nazi Zombie story, even worse, he now has a zombie arm attached to him. Desperate, he enlisted the help of a group of American nerds and stumbled upon a gay museum receptionist, together they must wake up the Communist Zombies who died in a near by town to start a Zombie WWII. The sequel is a much needed improvement to the first film, lots more gore, Troma styled humour and tongue in cheeck hilarity. It's everything a zombie fan can dream of. I cracked up so much, I love the writers. The acting was pretty average but the gore and witty humour made up for it. I have even more respect for Norwegian horror films, please keep them coming. A must see.

I can't claim to have seen the 2009 original splatter flick but this continuation is effervescently gory and wiseacre in the best possible way. While the predecessor was stymied by a measly one-joke premise and a recycling of the cabin-in-the-woods formula, 'Dead Snow 2' bounds headlong into unchartered territory. Wirkola adopts a kitchen-sink approach where no intestinal gag is left unturned (from a picket-fence impalement to a powerline entrails electrocution). After a homage to 'Evil Dead 2's possessed arm, the film branches off into inspired lunacy. The scene-stealer with crossover appeal is the horn-rimmed Martin Starr as the agog leader of the Zombie Squad. The punchline of the conventional weapon-gathering-in-a-hardware-store sequence is priceless. Wirkola isn't qualmish about shruggingly killing off a nuisance preteen by violently tossing him out of an infirmary window and this merely accentuates his gallows humor fearlessness. Typically horror fans derive most of their gratification with the ratio of newfangled deaths and there is not shortage in 'Dead Snow 2's dementedly funny arsenal (ex. A Mercedes emblem is embedded in a skull, a mortar decapitation, etc.). The climactic showdown on a soccer field between the undead Germans and Russians is a tour-de-force of World War III pandemonium with a tank running amok over the recruited soldiers. Peter Jackson would blush at the sheer volume of corn syrup on display in 'Dead Snow 2', a rollicking sequel that will be an acquired taste to most squares in attendance.