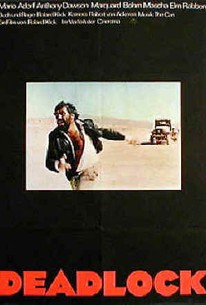 This routine western adventure finds two gunmen separating after a successful bank heist. The younger man takes off with the money and plans to meet his accomplice in a ghost town. The arrival is observed by a shadowy outcast, a nymphomaniac, and a beautiful girl who is unable to speak. The man meets his partner and a violent fight over the money ensues. Rocks, guns, and knives are employed as the money changes hands several times. The younger man emerges the survivor out of five who fought for the suitcase of loot, but the girl he became attached to has left with the money.

There are no critic reviews yet for Deadlock. Keep checking Rotten Tomatoes for updates!

There are no featured reviews for Deadlock at this time.