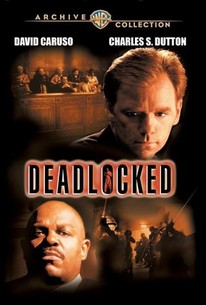 David Caruso and Charles S. Dutton play two men at the end of their wits in this beat-the-death-sentence TV drama. Jacob Doyle (Dutton) has just seen his son wrongly convicted of murder and decides to take the law into his own hands: He sequesters the jury himself -- at gunpoint -- and demands that they re-try the case. To this end, he summons prosecuting attorney Ned Stark (Caruso), a level-headed legal eagle who, despite the fact that he just convicted the boy, believes that he's innocent. Meanwhile, the SWAT team closes in on the courthouse. Deadlocked originally aired on the TNT network.

The rest of the film plays unswervingly like a traditional movie made for television.

There are no featured audience reviews yet. Click the link below to see what others say about Deadlocked!