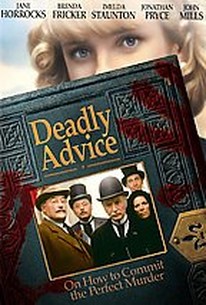 A disturbed woman starts getting friendly advice from some of the great murderers of history in this black comedy from Great Britain. Introverted Jody Greenwood (Jane Horrocks) and her bolder sister Beth (Imelda Staunton) both live under the thumb of their domineering mother Iris (Brenda Fricker). Jodie has romantic feelings for Dr. Ted Phillips (Jonathan Pryce), a local physician at least twenty years her senior, while Beth has become involved with a hunky male stripper, but both sisters feel paralyzed to do much about their relationships while Iris is still around. One night, Jody is visited by the ghost of Maj. Herbert Armstrong (Edward Woodward), a locally infamous man who made his small town famous with the spectacular murder of his wife. After he passes on some advice about how to achieve personal freedom, Jody kills Iris with an axe and hides the body with Beth's help. However, bad blood arises between Jody and Beth, and, after a nocturnal visit from well-known murderer Dr. Crippen (Hywel Bennett), Jody is inspired to pick up the hatchet again, doing away with Beth and her stripper. Jody beats the case against her in court and wins the heart of Dr. Phillips, but unfortunately she starts getting visits again ... . Jane Horrocks's performance as Jody won her the Best Actress award at the 1994 Catalonian International Film Festival. ~ Mark Deming, Rovi

John Mills
as Jack the Ripper

Dillie Keane
as Mary
View All

There are no featured audience reviews yet. Click the link below to see what others say about Deadly Advice!